Throughout the New York City Food & Wine Festival this weekend, Eater welcomes bloggers, journalists and food world stars to our lounge at the Standard Hotel. As the peeps pass through, we're going to chat them up and spit out the dialogue here in this business, From the Eater Lounge. Right now: Xiao Ye's Eddie Huang. 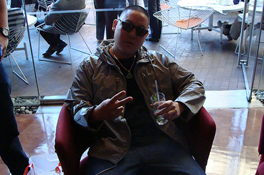 The New York Times review is probably coming this week. What are your thoughts? I'm excited. I think Sifton will get it. The Village Voice understood the vibe — we don’t give you silverware, we give you chopsticks. I'm really trying to get away from the window dressing. I serve shell-on prawns and it’s only 18 bucks. There are always parties in there that know each other, it’s a fun vibe every night, I hope Sifton gets that.

What are you hoping for — one star? If I get one star, I'd be so happy. But I just hope he enjoyed his meal. I don’t treat anyone different — I was there two of the three nights he came in. He’s funny. I've tweeted at him but he hasn't responded back. He doesn’t just talk about food. He’s taking care of his kid and talking about listening to Nas. I’ll actually be in St. Maarten on vacation when the review comes out.

Are you going to check it right away? Yeah. I respect him. He does such a good job. He gets the narrative. He’s a real journalist. I'm a big fan. There are some not so great ones. Like Gael Greene — she's irrelevant.

Two months in, are you still playing around with the menu? Yeah. I’m guest cheffing at No. 7. When I did the Ace Hotel event, I had the subs at No. 7 Sub, they're awesome. You know, I'm gonna do a couple days at No. 7., the chef from there will do a few days at Xiao Ye. Also, in a few weeks we're doing a Mexican dinner, an ode to Kenny Powers going to Mexico in Eastbound and Down.

Two restaurants in eight months — is that it for you? For this year, that is it. I’m a strange person. I can’t do anything where I’m not having fun. Like at Xiao Ye, I would rotate the menu every day but the chefs would think I’m tearing it up. I’m very reactionary. Someone on Yelp says something and I ask the chefs about it. At BaoHaus, I was the cook, me and my brother. I could change anything. At Xiao Ye, there’s a bunch of chefs, we've got to work together. I guess I’m good as a leader, unless people are just there to clock in. We’re all friends there, it’s pretty cool.

You got the Chairman Bao name trademarked. Are you going to make the SF Chairman Bao truck change their name? Yeah, I will, but I’ve been so busy with Xiao Ye. We were gonna go out there and cook in a truck in Oakland. But they’re worried that we’re gonna kill there — and then what? A lot of their customers from San Francisco have come to New York City and they like us more. But man, I'll cook for anyone, anywhere if they ask me.

Tell us more about that Kenny Powers dinner? What I’m gonna do is derivative of Roy Choi from Kogi, Asian and Mexican. The dinner I do is inspired by him and Kenny Powers. I'm gonna do it with a Western Chinese style. I just think the marriage makes sense.

Would you ever do a straight restaurant like that? I would like to. But I'm gonna zero in on BaoHaus, make it the number one late night carryout place. I think there are things I can do to perfect it. I'd like to do more one dish specials — like at McDonald's, there's the McRib, they only bring it out for a few months, but everyone orders it.

Where are you eating these days? I like Torrisi. They give Milano uptown a run for their money. I think Torrisi makes the best sandwich besides them. There’s no pretension. They just cook it and just do it right. You can see there’s a lot of care. I also like Cheeky Sandwiches. I'm at Shopsin's a lot.

So what are your plans for St. Maartens? Me and my homeboys. It's gonna be a lot of fun.

How long are you going to be there? One week. Leaving Tuesday, the day before the Times review — couldn’t have planned it better.

Anything else you wanna tell the Eater readers? Read Eater. Fuck Grub Street.