Throughout the New York City Food & Wine Festival this weekend, Eater welcomes bloggers, journalists and food world stars to our lounge at the Standard Hotel. As the peeps pass through, we're going to chat them up and spit out the dialogue here in this business, From the Eater Lounge. Right now: Daniel Angerer and Lori Mason of Klee Brasserie and Brats: Dogs & Wieners. 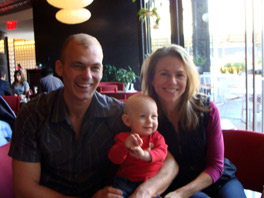 Hot dogs seem like a big trend. Were you conscious of that when you opened your two week-old restaurant Brats: Dogs & Wieners? Daniel Angerer:Well I'm Austrian. Over here it's the burger, over there it's the sausages. It's a delicious thing over there and it doesn't exist here. Lori Mason: He went on a sausage hunt all over. DA: Whoever had a sausage on the menu here, we probably tried. But I had this memory of the deliciousness of hot dogs from Austria, a good size, good flavor, with natural meat. LM: And in Vienna, there are all these pop up stands. Was that an inspiration: DA: I see it more as an old butcher deli type of restaurant. The walls are a mustard color, we have old pictures. On the other hand we have the diner seats there.

You keep a frequently updated food blog. DA: I do my own food photography because i hate how other people take bad pictures of my food. It brought out a different dimension for me, made me think about the colors of food, the whole composition. LM: He has a photo studio set up in the wine cellar at Klee.

Tell us a little about the Breast Cheese Incident earlier this year: Well I am a researcher and we're opening this cheese restaurant. LM: Our kitchen counter was piled high with cheese books. DA: So, she was fortunate enough to have so much breast milk. LM: I was actually donating breast milk after the earthquake in Haiti. So, I was stockpiling it in our freezer and our freezer was completely filled. I was going to throw the extra out, and Daniel was like, 'No let's make cheese out of it.' He blogged about it and then it became this whole thing. It was never served in the restaurant. Daniel likes to experiment and wanted to see how the taste and texture would be different. But it was never anything to be public. And I've spoken to other mothers who use breast milk in purees instead of water for babies, so it's not that unusual.

Didn't Gael Greene try it? LM: Once there was this big deal out of it, there was this request to try it. so Daniel made a batch at home, specifically for these press people to try it. So at that point it was a request. We started calling it the press milk cheese. Consequently, I got a call three or four days ago from the breast milk bank. And it turns out this whole thing gave them national exposure. And in the end it gave more milk to little babies that needed it.

What about the cheese restaurant? DA: It opens on November 1. It's a little cheese pub. We're doing 20 cheeses on a cheese board and cooking with 10 more cheeses in paella-like dishes, but with pasta and cheese. Mostly Alpine cheeses and domestic cheeses. People don't know what good cheese we have here in the United States. Originally we were thinking of doing wine and cheese, and we were researching and a cow can't really eat grapes. But there's a lot of grain in their diet. If you get down to the nitty gritty, the grain in milk resembled the grain in beer. And it's more approachable too. You can buy a $500 bottle of wine but not a $100 bottle of beer

And after that, are you set on restaurants for awhile? For now, but the sausage place is set up in a way—I don't want to say Shake Shack concept but you could have multiple units of it because it's a great market.
· All NYCWFF 2010 Coverage [~ENY~]