Throughout the New York City Food & Wine Festival this weekend, Eater welcomes bloggers, journalists and food world stars to our lounge at the Standard Hotel. As the peeps pass through, we're going to chat them up and spit out the dialogue here in this business, From the Eater Lounge. Right now: the one, the only, David Burke 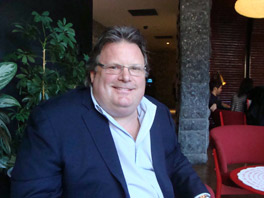 David Burke. What. Is. Up? I just came back from Florida looking for a new location yesterday. It'll be one of two possible locations. One is one the water in Miami and one is in Boca. The waterfront one would be a Fishtail and the Boca location would be steakhouse. Why Florida? Florida is a good market and a good opportunity. Also right now we have a project in New York, but the lease is not signed so it's hard to talk about it.

So what's your total now: Bloomingdales, David Burke Townhouse, this new one in New York, Fishtail. And we're looking for a steakhouse in New York. Chicago, Connecticut at Foxwoods, and the Vegas airport. We're in growth mode. We grew very quickly in a three year period.

Does there come a point where you have too many restaurants? One a year. That's our speed. I think part of the fun of it is new projects. There's two ways of looking at it. There are days when I wish I had one restaurant and could stay in the restaurant and cook. And then there's the ambition. I can tell you I'm not so excited in traveling around the world opening restaurants. I've been on the road since 1995 opening restaurants. I'd rather be in Philadelphia, New York, Connecticut. Instead of Dubai or China, where I happen to be going tomorrow. You're going to China tomorrow? With the New Jersey Nets. I'm a fan and they're doing some exhibition games and we're flirting with the idea of opening in their new stadium.

What else: We're going to relaunch the flavor sprays soon. I heard about your wine wheel. The wine wheel's awesome! I mean it's spin the bottle. It's such a treat right now. We're sitting on so much wine, so even if we give 50% off or a free bottle here or there it's fine. And it's great marketing. We had this guy spin the bottle and got 50% off wine so he ordered a $800 bottle. And then he ordered grilled cheese. It was genius stuff. I'm going to keep the wheel around.

Also pastrami salmon comes back on the market in 15 days. I wish I could talk about the new property. The timing is right for the concept. Now that that's ready I'm consulting for Bowlmor. I did a tasting for the menu today.

What's on the roster? There's a restaurant within the site that will have a mixed grill, meatloaf with prawn, shortribs, an upscale tavern menu. Also mac 'n' cheese baked in a tin can, a great grilled cheese with bacon sandwich topped with filet mignon topped with fried egg called "The Jersey Diner", steamed dumplings, some finger foods. There are two different menus. One goes to the lanes, one you sit and eat. There will be pizzas and calzones and big salads. I'm not a big bowler but I'm starting to bowl, and I want to start a chef bowling league.

When should we expect all of this? It opens in five or six weeks.
· All New York Wine & Food Festival Coverage [~ENY~]