Share All sharing options for: More Somms at the Lounge: Campanale & Madrigale

Throughout the New York City Food & Wine Festival this weekend, Eater welcomes bloggers, journalists and food world stars to our lounge at the Standard Hotel. As the peeps pass through, we're going to chat them up and spit out the dialogue here in this business, From the Eater Lounge. Right now: Joe Campanale and Michael Madrigale. 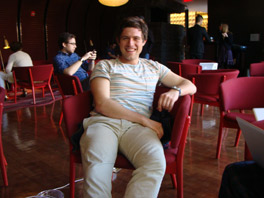 The big story for your restaurant group is Anfora. A lot of people here have mentioned it as their favorite wine list. It's a no-holds-barred list with nothing that's safe. And you chose to highlight anfora wines. Why anfora wines? I think that natural wine is fascinating. Anfora wine is the most ancient way of making wine. And I think that's the way the wine industry is going. Going back to the way we made wine before we had machines or chemicals. I think if I can introduce someone to them and they have a great experience, they'll remember it. It's nice to have a Chardonnay, but if you have something new, it will stay with you.

Were you taking a chance with this concept? I didn't think so because I really believe in it. But the space is small enough that we weren't so worried about it.

You you've basically achieved sex symbol status as one of the youngest, and most handsome wine directors in town. How are you dealing with this status? I'm humbled and if helps with business that's good. I don't get that question often.

You were on the track to become a master sommelier. Are you still doing it? I signed up for the advanced class but I bailed. I was too busy opening Anfora and I'm running the marathon. I'd like to do it but there's no definite plans.

What's your favorite wine list. High end and low end? The wine service at Eleven Madison is amazing. Gramercy Tavern has my favorite beverage program. Franny's list is so fun, and they're much better at editing than I am. I love Bar Henry.

Would you ever do something like Bar Henry and offer half the list by the half bottle? It's such a good idea, but it's his idea and so associated with them. Maybe I'll talk to him and see how he feels about doing it.

What do you see as the next trend for the upcoming year for wine. What is the real standout region? There's been a lot of push back about the term natural wine. I think what will be important is like what we do at Anfora where we highlight specific producers. Farmer wine. Farmer Wine? What's Farmer Wine? It's wine made by people who work in the vineyards. Those wines have more of a story and they have stories that you can get behind and relate to. In Italy the hot region is Sicily. Especially the regions around Mount Etna. It's so cool. You have acidity, but elegance and earthiness. 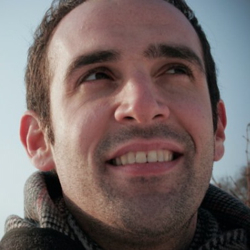 Michael Madrigale, Bar Boulud
So, you're fresh off yesterday's win at the showdown and you've been crowned "best blind palate in the nation" -- How does it feel? Are you off to Disneyland? I do this job because i have fun doing it, you know? It's really nice to have the accolade, but at the end of it all, it's just another day. I know I can taste wine, I don't really need to show anyone.

You've turned Bar Boulud into a real wine destination over the last year with you big bottle pours at wholesale pricing. Got any other tricks up your sleeve?
I do this thing. I call it the nugget. I put a wine on the list at cost. It's usually an obscure one so it's sort of nod to the wine crowd that comes into the restaurant.

There was a mention that you might be going for your Master Sommelier Certification. Is this true? No, no interest. When I started, I went to vineyards to make wine. I put my hands in the soil, met with the winemakers, etc. To me that's more interesting, that's the way I wanted to learn about wine.

Daniel is opening up a new restaurant right next door to Bar Boulud...hmm...any chance you might be involved with the wine program?
(mysterious smile) Maybe, maybe.

Any ideas on what we can expect from the wine program over there? Well the cuisine is strictly Mediterranean. So, you know, tomatoes, olives, that sorta thing and we want the wines to reflect that cuisine. So, pretty in depth with a focus on Languedoc, Provence, Greece, Israel, Lebanon. Areas that are sort of underrepresented but really producing some excellent wines. Laying off Burg, then? Yes, laying off Burgundy for a bit.

So, what are you favorite wine lists in the city? Alto has a great list. It's unique in that it is an Italian restaurant, but they have this incredible list of Burgundy. What about you favorite "low-end" list? On the low end, I dont know, I like what Colin Alevras is doing at Momofuku restaurants. Quirky stuff, lot's of Riesling. When I go out to eat, I want to drink inexpensive fresh, snappy whites. Restaurants that don't have those wines are essentially cutting off my lifeblood.
Interviewed by wine pro, WineChap's Talia Baiocchi
· All NYCWFF Coverage [~ENY~]