Share All sharing options for: Robert Bohr on Michelin, The Future of Fine Dining, His Fave New Wine List

Throughout the New York City Food & Wine Festival this weekend, Eater welcomes bloggers, journalists and food world stars to our lounge at the Standard Hotel. As the peeps pass through, we're going to chat them up and spit out the dialogue here in this business, From the Eater Lounge. Right now: wine pro Robert Bohr. 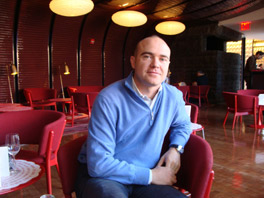 So you left Cru almost a year ago now. Eight months ago. I think that marked the beginning of the downslope of fine wine dining in New York. I think it's safe to say the era you presided over... Or were a member of...yes...is over. Yes people saw Veritas first and Cru second. They cut the path and we were happy to follow. For the time being at least in New York as we know it the era is over. But, I was reading Wine Spectator, and there was a restaurant in Sydney—the articles written about this one restaurant remind me of the articles written about Cru back in the day. It made me wonder, 'Do you have to do this outside of New York because of financial restrictions?'

How does Brooklyn Fare with no wine program at all get two stars? I guess it's the same question you could have asked about Ko. It's about the innovation and execution of just the food. It's crazy because Lucali makes bangin' pizza. Is that a two star restaurant because that one product is great? You can't just count the product on the plate as the sole reason why you get a star. If you're not bringing in the totality of it all, you're not telling diners about the full dining experience. You're doing your foreign readers a disservice. You're not helping them. And isn't that the point? To help people decide where to go?

What's changed in the last year in the wine world The blind following of natural wine is the most salient and the most disturbing. I don't think it's a fad, it's a trend. I hope it will improve what the term natural means. I'm all for the organic label. As someone who's worked with wine in Italy, we put in no chemicals. But we use sulfur. We control the temperature. But that doesn't make it unnatural. I think that the natural wine term is obviously vague and it's dangerous. I don't want it to end. I want it to get better and smarter and I want it to be honest.

Now you're with Tom Colicchio, running his wine programs. We recently re-focused it. We started in the spring to work on all of his restaurants, here and in LA. but I'm not sure what I do translates outside of New York. My experience is in NYC fine dining. The palate here is different than that in LA. It's not as applicable out there as it is here. I'll be playing with Colicchio & Sons and at Craft. We're going to focus on the whole aspect of wine service and wine hospitality. Tom has been known for a lot of things but never for his wine programs. Having Greg [Majors] there and serving the wines at the right temperature and decanting wine and having a point person there to oversee everything is important.

You mentioned that you think the NYC palate is different from that in LA. How? We have more access to European wines. And they have more access to wines that are grown out there. It's not that the New York palate is more sophisticated, but it's more broad. There is more access here to more wines, and a history of trying wine from more obscure regions in Europe. Here you even see a love for oddball regions of Slovenia. And a few years ago it was Austria. The mentality is about discovery and realizing what's new and great.

Will you ever be back on the floor? Tuesday, Wednesday, and Thursday at Colicchio & Sons.

What about your favorite wine lists around town? The wine list I've been dying to write for years is the one that Joe Campanale put together at Anfora. You pick your favorite producer from every region and showcase them. You throw it out there, make an argument and defend it. I'm psyched that Joe did it. And he's a humble guy. Which is important. You have to have humility in front of a subject that is, in an essence, unknowable.
—Interviewed by WineChap's Talia Baiocchi
· All NYCWFF Coverage [~ENY~]