Share All sharing options for: Tracking the Five Big Coffee Trends of 2010

Coffee in New York keeps getting better and better ever day, both at cafés and in restaurants, and with so much new interest in the stuff, a few trends have started to emerge. Here are five of the big ones: 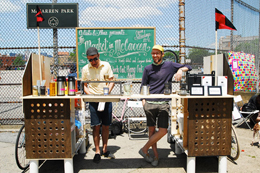 5) COFFEE POP UPS— Chefs aren't the only ones having all the pop up fun these days, over the past few months a number of baristas and coffee places have set up temporary operations, too. The scrappiest of the lot is Kickstand, a collapsible café from a few employees of Gimme! Coffee, that is transported from location to location via bicycles. In the last few months the team has opened up shop at the Hester St. Fair and outside the ball field in Williamsburg’s McCarren Park. Following along a similar path was Third Rail Coffee, which actually has a brick and mortar in the Central Village, but collaborated with a bicycle accessories outfit in SoHo this summer for a pop up called the Rapha Cycle Club (it closed last night). And on the more corporate side of things, in July Illy started a weekly pop-up espresso stall at Lincoln Center manned by an Italian coffee master, where the goods are free provided you ask him a question. Next Friday is the last day of the operation. [Photo] 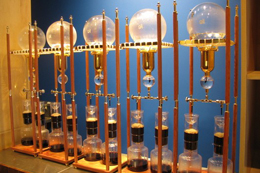 4) FLASHY GEAR— Perhaps as a result of the city’s growing interest in premium coffee, several shops and restaurants have recently stepped up their games in terms of the machines that actually brew the stuff. William Tigertt’s Peels opened last month with an Über Boiler, dubbed the “Rolls Royce of Kettles” for its ability to brew single cups within a programmable .1?C (the new Stumptown Roaster in Red Hook also has one). The seven month old Blue Bottle outpost in Williamsburg boasts a handsome Japanese slow drip cold brew machine that takes 10-12 hours to produce a batch, Cafe Grumpy in Greenpoint also invested in a high-tech single cup brewer called the Trifecta. And earlier this month, Eleven Madison Park changed its coffee service as a part of its upscale redesign to include a tableside coffee cart decked out with both a traditional chemex machine and a siphon — a complicated multi-vessel device with its own flame-lit heat source. [Photo] 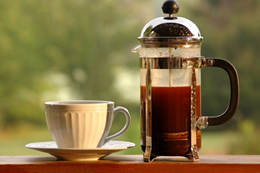 3) FRENCH PRESS FEVER— More and more restaurants are eschewing old-school coffee machines and large Fetcos, in favor of serving coffee either in individual French presses, tableside, or out of urns that have been filled with several pots made from these lo-fi devices (the Frankies restaurants, and the Breslin do this, to name a few). Does this process produce a better cup of coffee? Not necessarily — the old -school, more industrial machines do the trick just fine if the product is good and if they are used properly. But there's certainly more craft involved in French press service and it’s vaguely hipper because an automated machine is axed from the picture. For this reason, if a restaurant makes their coffee this way, it's almost always called out by name on the menu. [Photo] 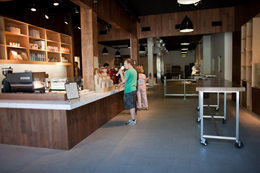 2) CAFES AS BOUTIQUES— A lot of the new hip coffee shops are designed without any area for energy-hogging, lingering laptop squatters to sit. But also some of the big name outposts like Caffetteria, Blue Bottle and the new Stumptown Roastery have designed their stores to include plenty of well-lit open spaces and space for handsome retail areas, kind of like trendy downtown clothing boutiques. This helps establish a strong, exclusive brand, perfectly catered to the growing interest amongst New Yorkers for premium coffee and premium coffee purveyors. And there's some fashion world crossover too: one of the big new café additions of the summer, the chic Lafayette Espresso Bar & Marketplace, has a designer and art world player, Christiane Celle, as one of its backers. [Photo] 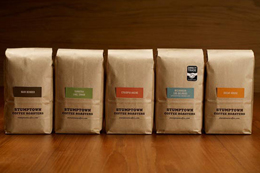 1) STUMPTOWN SLIPPIN' — One weird aspect of the Portland, Orgeon brand’s wide-spread popularity in NYC is that now, with so many cafés and restaurants serving their products, consistency has become an issue — at some places the coffee's great, at others, it's not. Although Stumptown has built its reputation on training the restaurants that serve its products, and offering on-site support, the fact is that even if restaurateurs make their staff sit through the training sessions, it’s up to them to make sure that they’re keeping up good practices, just as they would even if they weren’t using some fancy beans. Perhaps part of the problem is that Stumptown has marketed themselves too well, to the point where restaurants feel like the most important thing is having the brand on the menu, and that the coffee will just make itself. [Photo]