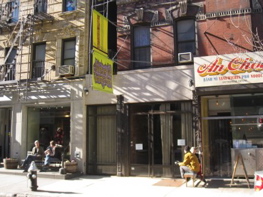 1) Tribeca: According to a sign in the window, Arqua, a fixture on Church Street for over 20 years that has been on the market since last August, will close next month. They're encouraging regulars to come by and say goodbye. [Tribeca Citizen]

3) LES/Greenwich Village: Bowery Boogie has a rash of shutter reports this week. The Wall, a one year-old spot at 85 Orchard, Bar 108 at 108 West Houston, and Ashkara, a kosher pita joint, are all closed. Bar 108 may just be renovating. [BB]

4) Downtown Brooklyn: Brownstoner learns that the McDonald's on Tillary Street has closed after around 20 years in business. Signs in the window state that they lost their lease. [Brownstoner]
[photo credit]