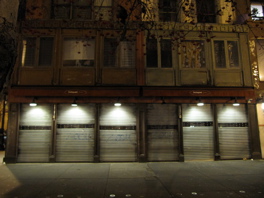 1) Greenpoint: A future shutter. Greenpoint Coffee House will close on April 1. From the tipline: "The barista just told me that something else will go in there, a project of the landlord's (probs a bar). The place has been open since, 2003, the food has never been great, but people in the neighborhood certainly loved it as a catch-all for coffee/lunch dates/after work drinks, etc. They were featured in that Episode of Bored to Death." [ShutterWire]

2) Columbia Street Waterfront District: Lost City reports that Red Tapas Bar, a small, out of the way restaurant on Columbia and Summit, has closed after just a couple of years in business. [Lost City]

3) Fort Greene & Clinton Hill: Readers of the Clinton Hill blog notice that Kif has been dark for three weeks. One commenter writes that the owner is trying to sell the business and move to California. Meanwhile Fork in the Road suspects neighborhood bar Loxis also doneski. [Clinton Hill Blog]

4) South Slope: An Eater operative reports that Safe Haven on 6th and 20th in South Slope shuttered a few weeks back, but it will reopen as a new entity by a former employee of the original space Bar BQ. [ShutterWire]

5) Harlem: What About the Plastic Animals brings the sad news that Settepani, a bakery on 120th and Lenox, is shuttered. Update: The bakery is just renovating. [WAPA]