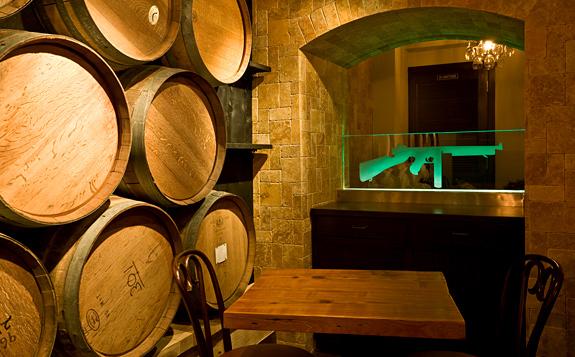 First up is a comment from a post on My Little Secret, a new subterranean Little Italy speakeasy (you might recall their tommy gun etched frosted glass pane). Amid a smattering of negative comments there's this gem:

"Went down friday night. had an amzing time. sat in a closed off red curtained area with one of my girlfriends. perfect place to kick back drink some wine and have some tappas style food. the fried artichoke hearts drizzled in gorgonzola cheese were to die for. the lobster sliders, were fresh and amazing. i love the ambiance of this place and the feathers on the table, opposed to fake flowers that most places use. i will absolutely be back. its a great first date place and a great place to kick off your night as well as bring it to a close. two thumbs up baby john!"

Just for comparison, here's one of the other comments:

Next up, a suspiciously positive review of Gaslight Pizzeria filed by a brand new Yelper (her only other review is of Gaslight Lounge next door):

"Gaslight Pizzeria is the greatest thing to happen to the meatpacking district in years! They serve pizza on the weekends until 5am! There's nothing in the area like it. I didn't realize but the pizzeria has already been open for over a year. Upon inquiring I found out that the chef for the pizzeria also does catering for the private parties next door, as well as offsite for the local companies like Google and the Fashion boutiques.

They even serve salads until 12am, making it the best spot for late night healthy eating in the area too, not that I plan on eating healthy that late. I've been back for lunch and early dinners after work and sampled everything from the roast beef and Italian sandwiches with shoe string fries to the lobster bisque, all being flawless. Prices are fair and in this neighborhood, the other more-affordable-end places cannot compete with the Gaslight Pizzeria. This spring, they plan to have outdoor seating and be open for breakfast. Joy!"

Though his efforts to help Haiti are laudable, and his Lebanese food, highly recommendable, the flurry of more than supportive comments for Philippe Massoud's ilili in just a few days is a tad suspect. While any of these comments on there own might not be an immediate cause for concern, four of them certainly catches the radar's attention. First up, a response to the latest Eater 38 update:

"There is nothing new or surprising on here. Tell us something we don't know. ilili should be on here - Philip Massoud makes some of the most creative food in the city."

And another from the same user just a few minutes later:

"I was hoping for something a bit more thoughtful. ilili should be on here - Philip Massoud makes some of the most creative food in the city. The brussel sprouts alone are worth the trip." [Ed: They are pretty great]

Another commenter can't help but throw in a positive word:

"agree... ilili has some of the most unique and traditional food in the city. And why so many italian restaurants... NO middle eastern?? not so exciting eater"

Here's a message sent to the tipline:

How could ilili have not made it on the top 38. It's some of the best food in the city.
Serious omission for any who is serious about food.

What happened to middle eastern cuisine? Most notably Philppe Massoud's Ilili at 236 5th Ave in Flatiron has been a real treat. The Lebanese fusion restaurant should surely have made your list over two Michael White restaurants. Let's be honest if at some point you had a warm spot for Convivio you've since forgotten it now hot with infatuation over Marea since its summer opening.

Finally, a commenter gets their shill on over at the most recent Deathwatch post, demanding ilili be delisted:

"Dude... ilili has been busy everytime i have gone there... I think you may be wrong on this one!..actually i know your wrong.... its awesome..."