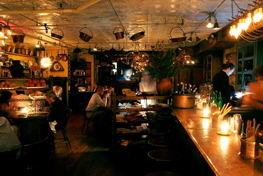 Last night, Community Board 2, restaurateurs armed with their huffy lawyers, and inquisitive members of the public gathered together in Cronin Auditorium at St. Vincent’s Hospital to duke out some juicy SLA licensing issues.

1) Donna Lennard appeared for a wine license at Il Buco Alimentari/Vineria on 53 Great Jones St., the Il Buco owner's new market and winebar. She was not met with a wave of support.

Lennard explained that the marketplace will be an arm of her current restaurant. The empty Great Jones Lumbar Supplies space is the perfect choice to house an Italian retail store selling homemade salumi, artisanal cheeses, imported olive oils and gourmet chocolates with an open kitchen and winebar in the back. She hopes to hold private parties that cater to “older, sophisticated, foodie” clientele in the 1,200 square foot space. What started as a mild Q&A became a heated, almost tearful, debate.

After addressing logistics, board members leaned towards approving the proposal, sneaking in an ultimatum that prohibits food demonstrations on the street at both locations. Lennard begged that licensing and food demonstrating be decided as separate issues. Licensing approval remains unresolved until stipulations are re-addressed. Will this be the death of Il Buco’s annual pig roast block party?

2) The board unanimously denied Civetta’s application to extend hours of operation. After a summer opening, Civetta, located at 98 Kenmare St, shuttered temporarily on December 7 to address the restaurant’s noise issues. A current owner of Civetta and Bottega del Vino (7 East. 59th St.) claimed hours of operation were the cause of bad business.

Manager Derek Stockholm spoke of noise reduction logistics, but disapproving tenants of the building gave them too many thumbs-down. One thing led to another, it became a battle of socioeconomic classes and community concerns: heavy smoking, disappearing mom and pop shops, beer-bottle littering.

3) The board granted approval for Aria on 117 Perry St. Kudos to the owners who played it smart, significantly reduced operation hours, and made friendly with the neighbors. One of the approving ones came with support, “a winebar would be a lovely addition to the neighborhood.”

4) Licensed at three other establishments, Denise Sheridan of Pear Tree Café at 92 West Houston Street originally intended to operate the restaurant till 4 AM but was unanimously denied. When the board questioned having a restaurant staying open so late, Sheridan quickly recanted her intentions. With the license of her late night, 74 person “tapas-style” restaurant (now bar) on a fine line, she agreed to reduce the hours.

5) The soft-spoken, heavy-accented pastry chef, Emilio Vitalo, of Ballato’s at 55 East Houston St. walked away rubbing his head after being told the application for his new space was incomplete. His lawyer in shades literally got in a board member’s face while debating about SLA’s acceptance of the application. The verdict? The 90 year-old operation must re-apply and wait another 30 days.

7) Travertine on 19 Kenmare St received an extra hour of operation now closing at 2AM on weekdays and 3AM on weekends, but the DJ must be axed.
—Jessica Lin
· All Community Board Coverage [~ENY~]
[photo credit]