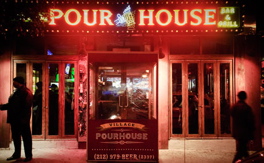 Clocking in at nearly five and a half hours, last night's Community Board 2 SLA Licensing Committee meeting featured over fifteen proposals for new liquor licenses. Naturally, with controversial applications such as a downstairs addition to The Mott, the NIMBY’s we’re well represented. On to highlights from the carnage that did ensue:

1) East Village veteran Sean McGarr, owner of the Village Pourhouses, Sidebar and, most recently, Hudson Terrace, tried to pitch his latest project at 159 Bleecker St. Claiming to be a “totally new, family-friendly concept,” this branch of the Village Pourhouse will have three floors featuring two BBQ grills, three open kitchens, three bars and arcade games in a “barcade.” Bonus intel: he was approved to buy the former Senior Swanky’s spot and decided not to, but said that he might in the future! Result: The lack of community outreach was a problem for the board. More on this one next month.

2) Easily the biggest showdown of the night was for a liquor license for The Mott, which has been operating for nearly two months. However, they aim to run the space just as former, notoriously loud tenant Double Happiness did—with a downstairs bar that accommodates 150 people. While everyone saw this coming, the NIMBY’s were out in full force tonight. This included mutterings of “this is bullshit” and “that’s a lie” for almost the entire one hour proceeding. Even with a promise to meet once a month with neighbors, a full time traffic consultant and two security guards, no one was happy. Result: Denied. In the end, despite “feeling bad” for the management team behind the restaurant, there were too many reasons why this one couldn’t go through.

3) Houston will be gaining Miss Lily’s, a Jamaican restaurant in the shuttered La Gamin space. And the chef? Bradford Thompson of Lever House and Beard Award fame.

4) The former Jarnac space at 328 W. 12th St. closed a few months ago, but it looks like it will be replaced a 23 table, upscale joint from a chef who formerly worked for Gordan Ramsay. Result: No problems as long as their kitchen is full service.

5) The people behind the proposal for 40-42 W. 8th St. apparently did their homework. The space has been plagued with a horrible history—mostly due to its double entrance on MacDougal and 8th. They came with a few stipulations already agreed to with the community. While members of the community “wished it was a tea room fully staffed by monks who took vows of silence,” they’re pleased with the outreach. Result: If community members are happy, CB2 is happy.

6) Plans were brought before the board to replace the shuttered Lulu’s space with Rubirosa Pizza, which currently has a location on Staten Island. The main issues here: a backyard garden, which is usually a deal breaker. However, they only want the garden for “ambiance,” rather than seating or standing. The committee gave it a go.

7) It looks like Christopher St. will be getting a new sports bar, operated by the people behind Jones Sports Bar, in the former Dugout space. The only way it won’t happen is if there are no places of worship within 200 feet.

8) Probably the most surprising hang up of the night came from an application for a Courtyard Marriott at 181 Varick St. The nineteen floor hotel is fairly standard, with the exception of an outdoor terrace bar. Needless to say, CB2 worried that this generic, hotel bar could become a “local hangout spot.” Result: They need to get back to corporate about noise control. Looks like Varick will have to go one more month without confirmation of the latest hot spot!

9) Ostia on 7th Avenue will soon be under new management by the chef and owner of Café Condesa. It will serve “Mexican food with a Spanish influence.”

10) One of the few layovers of the night was dealt out to the owner of Common Ground, seeking to fill the former Leela Lounge space. Problems included inaccurate floor plans and no efforts toward community outreach.

11) The board made clear what happens when you try to open a Mediterranean restaurant with a full liquor license in a commercial space on Mulberry St.: you get a denial.

12) The only hang up with putting in a new restaurant at 447 Hudson St. is that there’s a backyard garden in a land-marked, residential area. As a compromise, the owners agreed to limit the hours of the backyard garden until 10pm daily, instead of the proposed 11pm on weekends.
—Matt Duckor