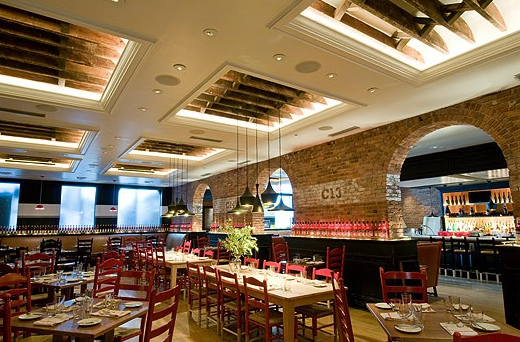 Today, we set our sights on some of the first shills of the fall season from online reviews of Bread & Olive in Midtown, Tribeca's Trattoria Cinque and Sho Shaun Hergatt in FiDi.

I just finished lunch from Bread & Olive and it was HEAVENLY! I usually order falafel or hummus from Middle Eastern restaurants but today I decided to try something new! I ordered ZATAR BREAD with LABNE and VEGETABLES (tomato and kalamata olives) and it comes with hot sauce and tahini. OMG, so freaking delicious! Perhaps my favorite mid-town lunch of all time? Seriously, it is heaven. I can't wait to order again. I'm going to be fantasizing about it all weekend. :-) Quick delivery too.
Shill probability: 77%

FiDi fine dining giant Sho Shaun Hergatt may have just solidified its status as an Adventures in Shilling veteran with this twofer on Menupages, if it hadn't already:

SHO fills the need for high level dining downtown. Lunch yesterday did not disappoint. Aside from the restaurant's confusing name (which, perhaps, needs to be shortened or simplified) we experienced friendly (even a bit oversolicitous), knowledgable service, chose from an adventuresome menu, enjoyed such appealingly presented appetizers as moist, well-spiced quail legs accompanied by a medium cooked quail egg. Next, a nicely garnished rectangle of perfectly prepared fish (a rarity in most restaurants) and a main course of pearl barley "risotto," topped by a generous quantity of unusual, imported mushrooms and ringed by a tasty but not overly rich froth. Well worth the expense, especially if the present high standards will be maintained as the restaurant fills up.

And this review from the same user, just eight days later:

Our first return visit was as fine as our initial experience. We were welcomed with two exquisitely prepared complimentary small courses, followed by the three course fixed price offering, which included a tender, tasty, boneless loin of rabbit main course and a dessert of six fine, ripe cheeses. It was obvious that Chef Hergatt is focused on making every morsel offered to us an exercise in perfection, including a very generous assortment of the very best petit fours, again on the house. Service was formal, yet prompt and friendly. Music, while present, was unubtrusive, as were the voices drifting in from the separate bar, so easy conversation was possible.
Collective shill probability: 92%

Finally, a reader drops a suspiciously positive endorsement of Italian mega-eatery Trattoria Cinque in the Eater comments. Special bonus: another reader nominates them for "shill of the year." Here's why:

The hospitality was amazing. The food was mouthwatering. I have visited Alfredo's at Rock Center and always was delighted with the food and service. With the exception of one night that Alfredo's was packed and our seating took longer than the usual( Normal for any restaurant ) As for Tribeca's new diamond.. It's by far a diamond in a rough. it's a GEM.. Love it!! Welcome to Tribeca "Trattoria Cinque" my new hangout.

When another commenter has the audacity to question the greatness of owner Russell Bellanca, our shiller fires again:

BTW, what an awful comment about Mr. Bellanca ( from piggindapot ) What happened to the days when a restaurant was judged by the food and hospitality. Get back to the basics on restaurant reviewing and stop insulting the owner. Such Rude folks!! Mr. Bellanca, Good Luck with "Trattoria Cinque" it will do GREAT.
Shill probability: 100%