Share All sharing options for: First Word: BLT Grill Gets the Green Light 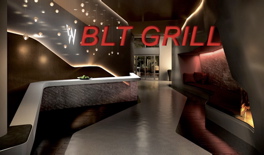 Yesterday evening Community Board 1 got together to determine the fates of a small number of restaurants seeking liquor licenses in the Financial District. In what was one of the shortest and most civil meeting in recent memory, everyone went home happy.

1) The folks from BLT Grill at the W Hotel on 123 Washington—the newest addition to Laurent Tourondel's BLT Empire—practically got the green light before opening their mouths. Among the few things the reps shared about the project were that they'll have standard hours (closing no later than 11:30 PM on the weekends), two floors, and a small plaza/patio with about 20 seats. Unlike in neighborhoods like Soho or Nolita, the residents here had no problem with a big hotel restaurant moving in. They just want somewhere to eat.

2) The board gave a first time restaurateur the go ahead for his proposed outpost of Bon Chon at 104 John Street, in the former Zen Palate space.

3) The owner of O'Brien's Terminal Tavern, an Irish bar and grill that will be opening on the concourse level of the Staten Island Ferry Terminal, also received unanimous approval for his liquor license.