Share All sharing options for: Top Chef Episode 3: The Day Everything Changed

To welcome back the real Top Chef, we welcome back comedian Max Silvestri, who will be here every week to take us through season six. 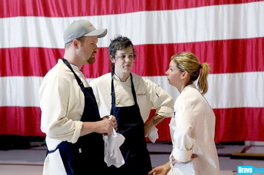 Even before the start of tonight's episode, I missed Eve. I am very sad she's gone! Where is she now? Probably trying to catch butterflies with a stockpot and thinking a mop is The Queen of England. "M'lady, welcome to my restaurant! May I offer you some champagne?" And then she gives the mop a really poorly made glass of champagne.

We are still at the point early in every season where there are still too many chefs to keep track of. As the title sequence blows by, I am almost sure Laurine is new. She was not on this show the last two weeks, was she? It seems unfair to just make up a person this late in the game, Bravo. But it's your show. The House always wins. Always bet on Andy Cohen.

This week's Quickfire introduces us to Mark Peel (ha!), of Campanile Restaurant. He is standing in front of mounds and mounds of potatoes, and as he started as the vegetable boy for Wolfgang Puck, the chefs need to make a potato dish. Jesse is blown away by the selection. "There is every kind of potato you could possibly think of!" As in, upwards of 11 or so types! The challenge should have been for all the chefs to think of as many potatoes as possible. Maybe Jesse would have won this one? Probably not, though.

Ron, the Haitian Sensation, says how he feels like he's like Bob Marley with music, because food is like peace and love. Hmm. I think I get it. What he's trying to say is that the potato is the Jah of heady nugs. Meanwhile, Preeti accidentally uses Ashley's simmering water and they almost come to blows. (They don't almost come to blows.) But it is mildly tense and awkward for about 20 seconds. Both Laurine and Preeti describe their dishes to the judges as appropriately "out of this world", which I think means their dishes can pause and unpause time and also "gleep" objects into existence. That joke is for my "Out of This World" heads out there.

Chef Peel picks Eli's, Ron's, and Jesse's dishes as the worst. Jesse put too much cayenne in her soup because she is bad at tasks. But, hey, at least she beats herself up about it, which is a very endearing trait. Right?

Peel's favorites are Jennifer, Ash, and Ashley, but Jennifer's mussels win out for being almost "classically French." They looked good! Good for her. Mike is upset, though, and he claims it's favoritism, which is not a word I think he understands. "My pants don't fit. It's favoritism! I get sleepy in the afternoon. It's favoritism!"

This week's Elimination Challenge will have the contestants traveling to Nellis Air Force Base and cooking for the airmen stationed there. And because the show knew we needed a break from terrible Vegas cliches, the challenge is introduced with terrible military cliches. Padma: "Colonel, what are their orders?" Colonel Belote: "Their mission, if they choose to chef-cept it, is to outflank steak the tummy enemy. Report for foodie at oh-yum-hundred hours" Or something.

The trick to this challenge is that the contestants won't know anything about their kitchen or supplies until a few hours before the meal. And as they are serving the meal as one, Mike has the idea of splitting them all into teams of two. The brothers don't get to work together, and they almost whine about it, and then Ron and Jesse are so picked last it's a little uncomfortable to watch. Poor guys. You are total Bottoms (of the getting picked pile).

When the chefs show up at their kitchen, they see they have mostly canned ingredients to work with, and no burners. This will be tricky! And it's important that they do a great job, because they are cooking for our troops. A number of chefs express quite sincerely the special meaning this challenge has for them, as they come from families with long and proud histories of service. I admire that, but not as much as I admire Preeti's commitment to this challenge. You see, for Preeti, the defining moment when she decided to be a chef was 9/11. Yes, that 9/11. When Everything Changed, the only thing that made sense was to cook, you know? And then she went to culinary school, YEARS LATER. It took a few years, I guess, to act on the only thing that made sense. Oh man, you are an America hero, Preeti. You are the greatest country in the world.

After their food is prepped, the chefs take a convoy over to the "jet garage," as someone calls it. Oh, so fancy, calling it a "garage." It's a jet hole, guys. We're in America. (It's a hangar.) Mike says the twenty minute ride is like they are going to war. Someone send him to war, please. I think him saying that counts as volunteering.

The servicemen and women and their families truly seem to enjoy the production and the chefs taking the time to serve up such an amazing meal, and their heartfelt reactions to the food and its sentiment juxtaposed with Tom and Gail sweating and whining about the chowder makes the judges seem really petty and stupid. Tom, why don't you go walk over to an air force pilot and knock the shrimp out of his hand and tell him he's a coward for eating something so under-seasoned? Look at me, growing a heart! Support our troops, guys.

The judges bring out their two pairs of chefs as their favorite, Mike and Michael, and Eli and Kevin. You can just not keep Kevin away from the top! (Or from the pool and the shirt-removing machine.) Michael's amazing braised slab bacon acting as pork belly truly impresses the judges, and he's chosen as the winner. It's revealed Mike had little to do with it and spent most of his time making a bad shrimp salad, so the judges ask him to go bring out the losers and also himself.

Mike so unhappy about that I bet that the picture of the skull tattoo on his undershirt is even gritting its teeth. Preeti and Laurine join him. They made a really boring and terrible pasta salad. Neither offer up much of a defense, though Preeti somehow thinks it was great. Sure it was. It looked so boring. My girlfriend had a migraine for 4 hours on Sunday and then still managed to wake up and make a more interesting pasta salad then this in like 20 minutes. You guys stink. But Preeti stinks the most, and the judges send her and her knives packing. It is sad, but that doesn't mean she is going to stop cooking. Every day she is going to wake up and remember 9/11 and get working on more pasta salads, which is why They hate us.
—Max Silvestri