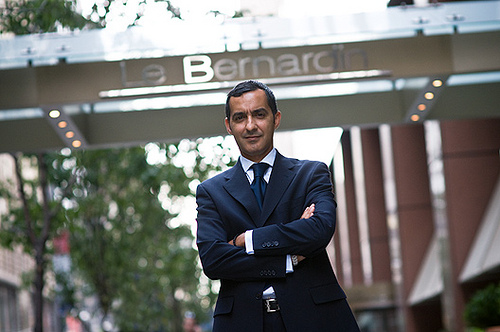 Midtown West: For nearly twenty five years, Le Bernardin has been a fine dining force to be reckoned with. During that time, it's held three Michelin stars, a four star rating from The Times and received countless other accolades. And since chef/TV star Eric Ripert became executive chef years ago, one of the city's most famous restaurants got even bigger. With all this, Le Bernardin can be booked solid for weeks in advance, which means you'll have to get past Ben Chekroun to score a table.

Ben Chekroun, Dining Room Manager: We have one hundred seats and we like to keep it at that amount.It's a 8p.m. on a Saturday night, what's the wait for a table? Without a reservation it's going to be tough. I mean, it's a Saturday night, most people have reservations. So, it could be anywhere from an hour and a half to...To "not happening?" To not happening. Yes. If we're fully committed and everyone shows up.

What can I do to make my wait shorter? No, nothing. ...How about gifts or cash to speed things along? Well, that doesn't really work here. There was a story run by, I think, Gourmet a few years back, where they sent someone out to different restaurants trying exactly what you just said and we came out on the top. No money was accepted here. But I think that being nice, smiling, having a good attitude, or if you're a regular—all of these things can help. We'll try to help you, that's what we're here for. If we have an empty table, why not fill it?

Do you have any favorite customers so far? Well, the restaurant has been here a very long time. I've here a long time as well, about fifteen years, doing this job. We have a lot of repeat customers. Therefore, you create a relationship with people, a friendship and a lot of them are big favorites of mine and I look after them with pleasure. I'm on the phone with their secretaries all the time—I know what they like, what they dislike. I can name more than one, but I'm not going to name any right now.How about celebs? Absolutely. Something I insist on is that this is like a little oasis in Manhattan, so we do everything to protect their privacy. We're not going to leak it to the press, we're not going to let people go up to tables and ask for autographs. I make sure there are people there to prevent that from happening.

What's the most outrageous request from a customer that you could accommodate? We've done a few things here that, at first, we didn't think we'd be able to do. For example, we had a birthday party here a few years ago and it was for one hundred and fifty people. A third of the room was used up by a stage for a well known musician. So I couldn't figure out where to seat these people if they're using a third of the room for a stage. Well, we ended up doing it. They had the whole place on a Saturday night. It was the who's who from Hollywood and Washington. It was an amazing party that ended at two or three in the morning. But at first, that was like "wow, how are we going to do this?"

What's the most outrageous request from a customer that you could not accommodate? Many things over the years. But there's one that happened not too long ago. A VIP, a regular, a good friend called the restaurant and wanted a dinner sent to him by helicopter to Philadelphia. We didn't go for it because the food doesn't travel well. So what we ended up doing was sending one of the sous chefs and he ended up cooking dinner for him. Well, that's not so bad. Absolutely, not so bad. We always find an alternative if we can't say yes.

How do you deal with VIP's, when there are no tables left to give? Well, it really depends. In every dining room, depending on the night, you have some kind of flexibility. Sometimes tables leave earlier then you'd think they would leave. You have someone who doesn't show up. The bar is always an option. But if it's a regular who comes here a few times a week, like many of our regulars do, then you're going to go out of your way to make something work for them.

What's the one Gatekeeper tool you need to do your job? Patience is certainly a key thing. People will come up with many types of stories, lots of different things can happen at the front door. But mostly you need to get to know your clientele. Some people may get nervous because it's their first time in a three star or four star restaurant and you have to make them feel comfortable. Have the same attitude you expect from your guests.

As a four star Times restaurant, there's a certain expectation, a level of pampering, that people expect when they eat here. Since everyone is treated so well, how do you make the VIPs feel special? Do you think they expect something a little different? Actually, I would say that the VIPs already get everything that you'd think of doing for them. It's actually the customer you've never seen before who's standing at the door at 7:30 and it's raining outside, you make sure to arrange transportation for them. It's things like that. That's how you provide that level of pampering. They don't necessarily expect that from you, but you step up and make sure to help them.

Is there any level of added pressure when you have some of the upper levels of food royalty in the dining room? Pressure is really an everyday thing. When you walk in the dining room, you can have a Frank Bruni or any journalist at any table and you don't know all of them. So what I say to the staff is that everybody needs to be treated like a journalist. Everyone needs that level of service. Everyone is here for an experience and they need to leave feeling like that got that experience. If they don't get it, they're not coming back. Period.

Since Top Chef and Avec Eric, do people come in more to see Eric? Of course, of course. He's the chef. He's the star of the restaurant. People come and they want meet Eric, absolutely. Does that ever get to be too much? No, no. It could be anybody. It could be a young student at the CIA, who's looking up to him as his idol. Or it could be somebody who appreciates what Eric is doing cooking and restaurant wise. But no, it's not overbearing. Eric comes out with pleasure and shakes a few hands and introduces himself.

When you're not at Le Bernardin, where are you eating? I used to go out a lot. But now I have two kids so that happens a little bit less often. But I still love Balthazar. I also love Dovetail on the Upper West Side. I think that John Fraser is a great chef and I love going to Dovetail on Sundays.
—Matt Duckor