Share All sharing options for: Top Chef Las Vegas Episode 6: For My Next Trick I'm Going To Saw Toby Young's Head Off

To welcome back the real Top Chef, we welcome back comedian Max Silvestri, who is here every week to take us through season six. 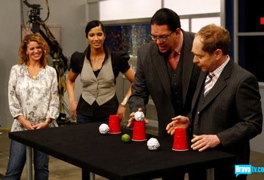 For the second week in a row, the episode begins with one of the chefs taking an angry steamy on Robin because she hasn't been eliminated yet. It's almost painful to watch. Everybody misses Mattin and shoots eye daggers at Robin to very plainly let her know they wish she'd gone in his place. The not-Robins (that's what I call them) go so far as to all put on red scarves to honor Mattin and not offer her one. Harsh, guys. This is some high school shit, if you want to a reverse high school where wearing red neckerchiefs was what the cool kids did. It's like The Wave. "Strength through discipline, strength through community, strength through dressing like a mime bullfighter." Robin awkwardly takes one for herself and tucks it into her sleeve. Yikes. Know your role.

This week's Quickfire Challenge is actually an intriguing one, to create a contrasting duo of foods on your plate, but it's buried in a terribly Veg-assy introduction by Padma. "Maybe you remember from having pulses that we are here in Las Vegas, and what we have decided Vegas is all about in this particular challenge is temptations. We all have an Angel on our right shoulder, and never our left, and we all have a Devil on our left shoulder. Did you know "sinister" comes from the Latin word for left? Speaking of sinister, we are in Sin City, so for this challenge create a dish that showcases both your light and dark side, and as the Force has two sides as well, don't force your flavors. Like John Milton wrote in Paradise Lost, fruit isn't always good so check it for ripeness and the Devil usually tells us to cook with a lot of butter but that might mean you'll be cast out of the Garden of Being on This Show. Another one of my favorites duos is Hall & Oates so don't make oatmeal. In conclusion, blackjack!" The guest judge is James Beard Award Winner Michelle Bernstein.

The inspiration for Robin's dish was being diagnosed with cancer. Geez. I am certainly not one to make light of anyone's struggle with and subsequent victory over something like cancer, but come on. It's a bit of a stretch to shoehorn that story into a sixty minute cooking contest. "Because I was diagnosed with two types of lymphoma, apple crisp." But the judges don't agree and Robin wins her first challenge, beating out a visibly upset crew of chefs. It is funny how mad everyone is while a person who fought her way back from the brink of death expresses joy at literally the smallest amount of success. Eli seems like he's gonna vomit in his faux hawk. "Ugh, a pretty good way to win a Quickfire is to tell people you have cancer." Well, yes. Robin proved that's true. Maybe it was worth it? No way to know.

Speaking of duos and having two oppositely irritating forces around that bother you while you are trying to think, famed comedy magicians Penn and Teller show up. I am mildly disappointed because their appearance means the magician quota has been filled and we probably won't be seeing Criss Angel on this of Top Chef, even though he and Mike Isabella clearly both shop at the same rapey t-shirt warehouse. I bet he and Mike met when they both reached for the same pewter ankh-shaped toe ring. Mike was all "I saw it first!" and then Criss Angel did a trick and made the charges against Mike disappear. Friends forever. Mind explosion!

Penn & Teller perform a classic ball and cup trick. As is the custom, Penn yells and Teller doesn't say anything. Then they do the trick again, but with clear cups and more magic. There is so much magic going on right now that the stick up Bryan's butt almost comes alive and tries to clean up or dance or something, like in Fantasia. Kevin looks like one of the hobbits at Bilbo's birthday party seeing fireworks for the first time. He is so huggable. I want to take him places. We could just hang out and do whatever!

The point of the magic trick, if there is ever such a thing, is to explain this week's Elimination Challenge: deconstruct a classic. The chefs draw knives for dishes as caesar salad, chicken mole negro, pot roast, shepherd's pie, and fish and chips. Ron draws paella and is over the moon about it as he cooks it all the time in his restaurant. Unfortunately for us, because Ron's the best, we learn that he doesn't really have any idea what deconstructed means.

There are struggles in the kitchen as the chefs prepare. Ashley was poor as a child, so beef is foreign to her. Eli brought his own pressure cooker to the show, because the 15 that the kitchen provides aren't enough, and it explodes all over his dumb face. Michael makes his own bread for his Caesar salad because brothers always be competing, and Jennifer looks like deconstructing meat lasagna will kill her. Mike is so confused by Eggs Florentine, which is on every diner menu ever. He loves his joke that to him it's Eggs Foreign-To-Me. You should write these recaps with me, Mike. That's an open invitation. But I do not have a 2-way pager so I'm not sure how you'll reach me.

As the judges are served their meal, we see Toby Young is back. Oh great. What a super thing. I can tell you that everyone watching is very excited by that. It's extra depressing because he seems a little de-fanged this season. Instead of ham-fisted Britishisms that everyone can just shake their head at and ignore, he seems to be focusing on providing actual food criticism, which is not his bread and figgy pudding. (That's what British people use instead of butter.) And luckily for no one Teller keeps up his character and doesn't talk the whole meal. Really? Maybe let him sit this one out. Or, you know, speak. It's not like people think Teller can't actually talk. We realize that's just a thing he does when on camera. But we can handle it. For example, if Penn took a break from dying his chin beard and being a loud jackass, we'd still believe he was a good magician.

The judges ask to see Ashley, Michael, Kevin and Jennifer. Lot of familiar faces on top. All did super jobs. Ashley, despite not handling meat until college, makes one of the more delicious "pot roasts" the judges have ever eaten. Michael's caesar salad was impressively presented, and Jennifer's meat lasagna somehow managed to be simply and expertly executed. But the winner is Kevin's chicken mole negro, and he seems to deserve it. What I know of mole is that it has like 40 ingredients, and he somehow managed to put those all over the plate in different parts and still make it add up to an amazing mole. Well done, you James Beardo.

The judges are obviously less pleased with Laurine's, Ron's and Ash's dishes. Ash made a shepherd's pie without mashed potatoes. Criminal! His parsnip puree was gross, so he substituted peas instead. Whoops, wrong. Laurine made fish and chips with no chips and bad fish. Well, those things seem important. But Ron's paella really let everybody down. It wasn't really deconstructed, nor was it a good paella. Toby pronounces the word phonetically, and then tries to take a half-ass stand about why one would ever say "pie-ay-ya" when we don't say "Meh-hee-co" or "barth-a-lona." Michelle calls him an idiot and the world agrees. More importantly, Ron is the one sent packing. This made me genuinely sad. While he did struggle with the challenges, he honestly seemed like the nicest, most positive guy there. But this isn't Top Nice Positive Scallop. This is Top Chef.
—Max Silvestri