Share All sharing options for: Giant Pretzels, Currywurst Unleashed at the Standard

As mentioned earlier, Michelin-starred chef Kurt Gutenbrunner is in charge of the food program at the Standard Hotel's beer garden, which we will refer to from now on as the Oompa Oompa Room. He finally launched the food and draft beer program over the weekend, and a walk-by last night revealed it's doing incredibly well. The big KG tells Fork in the Road exactly what's on tap, just in time for New York's late September drinking enjoyment: 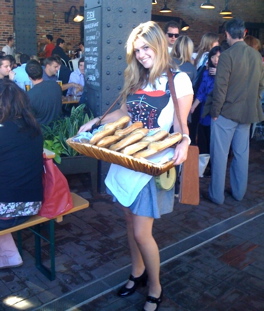 We're having three kinds of beer: A Bitburger pils...a wheat beer from Munich called Ayinger, and a dark beer from the former East German part...Then we do different sausages, like the classic weisswurst that Bavarians eat, a cheddar sausage, a classic bratwurst, sauerkraut, and the huge pretzels. We have great hot dogs over there too, so the kids will like it. Oh, and we have currywurst, the German classic that you eat on the street.

Oh, but the best part about the beer garden hasn't even been revealed. While enjoying the sausage and brewskies mentioned above, lovely ladies like the one to the right will be pushing the pretzel program. Correction, the monster pretzel program. And yes, yes those outfits are on sale for both men and women at the Standard's website. You're welcome, New York.
· Kurt Gutenbrunner on The Standard's Beer Garden Menu and Oktoberfest [Fork in the Road]
· Sausage Parties: Gutenbrunner Joins Standard Beer Garden [~E~]
848 Washington St., New York, NY