You May Also Enjoy: Xunta

Share All sharing options for: You May Also Enjoy: Xunta

To get everyone through the dog days of summer, we've asked a handful of New York City literary types to write about a favorite, somewhat oddball restaurant, bar, or place of note that perhaps exists mostly off the radar. Here now, Chris Mohney, big wig at Blackbook. 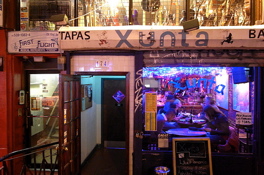 As someone who came to New York later than your average 23-year-old arriviste, I’ve had less opportunity to discover the city than some. These days I spend many evenings looking after a new baby, so I have a lot less time for discovering the city than I used to. And since I’m a self-obsessed nostalgia junkie, I’m less interested in experiencing novelty than looking for a place where I can re-create the good times of yesteryear. There are restaurants serving stellar cuisine and lounges slinging sublime cocktails, but I often prefer a joint where I once had a great deal of fun, and hope to again.

One such place is Xunta, a modest tapas bar in the East Village. Even those who like Xunta describe it as unremarkable, undistinguished, a fallback at best. You might go there when you don’t feel up to complicated arrangements and when you don’t expect much. It’s a cramped basement with rickety stools around barrels and a couple of barracks-style tables. Service is genially indifferent, the lighting’s dim, the décor a mishmash of bric-a-brac. The extensive tapas menu offers a few standouts, but even those aren’t terribly memorable. The chorizo’s a little overcooked, the spicy potatoes dry. The cheeses and tortillas are pretty good. Bacon-wrapped dates are hard to screw up. The sangria is more about quantity than quality.

But so what. One of the first nights I ever went out in this town—I think it was the year 2000—I ended up at Xunta with a small group. I hadn’t moved to the city yet; I was just visiting a friend who had. There were four or five of us, and we crowded around a barrel and commenced ordering. I was already completely starstruck by New York, so I was greedy in eating, greedy in drinking, greedy in conversation. I kept prodding my friend to invite more people. There had to be more people she could call that I could meet and be amazed by. New Yorkers, even in New York, still seemed exotic to me.

Soon she was phoning everyone from the high school where she had just started teaching—other teachers, administrators, her boss, men she had crushes on, women she barely knew or didn’t like. Plus all their friends, and theirs. More and more showed up. Soon we took over our table, then the table behind us. Then we colonized the bar. We ordered more food, double and triple platters, and of course more sangria—the pitchers were emptied as fast as they came. Eventually the pair of waitresses dealing with our mob stopped bothering to count pitchers, keeping tabs on the food alone. They brought more sangria in each hand with every trip back from the kitchen.

I finally stopped eating just as a platter of large, whole grilled sardines hit the table. Whole fish give me the willies, and my friend teased me as she picked one up. I dared her to eat the head off the fish. She responded by biting the heads off all five sardines in succession, swallowing each head with glee. I nearly died right there. (She regretted this later, when some things that went down came back up again, but fortunately there were no visible fish heads.)

After several hours of this, and a great settling of the tab that must have involved not a single proper operation of arithmetic, we went on a Village bar crawl that sent the night from great to bad to worse to unforgettable. It took me almost 36 hours to recover (mostly) from the hangover. But that night cemented my decision to move to New York with no job or prospects, and things worked out better than fine. Out of context, Xunta may never be more than a mediocre restaurant that nobody really cares to like or dislike strongly, either way. And plenty of other New Yorkers have great nights out too, every night, at a much better class of establishment.

Xunta’s the place where I started to discover New York though, so I’ll always have a weakness for it—even though the chorizo’s much better at Casa Mono.
—Chris Mohney
· Previous Editions of You May Also Enjoy [~E~]
[photo credit">