You May Also Enjoy: D'Amico Foods

Share All sharing options for: You May Also Enjoy: D'Amico Foods

To get everyone through the dog days of summer, we've asked a handful of New York City writers to tell us about a favorite, somewhat oddball restaurant, bar, or place of note that perhaps exists mostly off the radar. Here now, Gabe Delahaye, editor of Videogum. 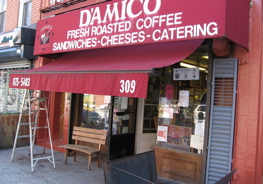 D'Amico Foods on Court Street in Carroll Gardens has a screen door. Which is odd. Very few places in Brooklyn have screen doors. It's not an unpleasant, steel-framed, slap-you-in-the-face-on-your-way-outside-with-the-shotgun-to-put-the-rabid-dog-down-type of screen door, either. It's a wooden-framed screen door, like one would imagine a General Store to have, if one had ever been to a General Store. Outside of, like, Epcot Center or whatever. In fact, once inside, all of D'Amico has that worn-in, well-lived, General Store feel to it. It's what the founders of Trader Joe's probably envisioned for themselves before they decided that a ramshackle piece of garbage aesthetic with cheap-looking fixtures and corndog outfits would have to do. Trader Joe's can cut it out, by the way. It's 2009. Barack Obama. We don't really need to do "themes" anymore.

They also have a big trophy in the front window from the Coffee Olympics (probably). You know their coffee is going to be good, because bad coffee couldn't possibly have won a trophy that large. Perhaps a smaller trophy, sure. Lots of coffees have won small trophies. I'm sure Chock Full o' Nuts, which isn't even coffee actually but is instead a material they use at playgrounds in poorer areas that can't afford nice, comfortable, safe, easily-hosed-down rubber flooring surfaces and have to use wood chips, which actually seem dangerous and certainly as knee-scraping and neck-cracking as pavement, but anyway, these wood chips are then ground up finely, to the point where you can't even taste any of the child-blood or child-sweat soaked into them, and the grounds are then put into cans, and they are sold as Chock-Full-O-Nuts, who probably has a tiny trophy somewhere. From a regional competition maybe. For which coffee tastes the worst.

D'Amico has been around for more than 50 years (51 years, to be exact). They are famous. They have been written about in the New Yorker, if that means something to you. They roast their own coffee, which you can buy from giant open barrels with plastic scoops in them. Or you can just get a cup of coffee. Or both. You make the rules! They roast a "tiramisu" flavored coffee, just to give you a sense of the width and breadth of the variety available, even if that particular example sounds awful. They have a counter where you can get bagels, and some sandwiches, but why? I mean, go ahead. I'm just saying: there are plenty of other places to do that. You can get food at a lot of bowling alleys, too. So what? Just shut up and bowl (bowl = drink coffee). In the back there are tables for sitting at, surrounded by broken down cardboard boxes and crates of stuff. You feel right in the thick of it, if that's what you like. You can also get a cup of coffee to go, they'll let you. They usually have a few varieties in self-serve urns. And an espresso bar for your espresso drinks, where you can sit on a stool and act like a gentleman. And the creams and milks are in a refrigerated dispenser that looks like it's from a 1970s college dormitory, but also is probably so much more not-covered-in-Ebola-and-SuperAIDS than the man-handled dairy thermoses (sitting in the anti-milk sun) at some of your other establishments.

Just today, I passed by a children's little league game, and one of the teams wore shirts that said D'Amico Foods. You see? Neighborhood good guys.

The first time I went to D'Amico was with Frank, a neighborhood real estate broker. I had already been living in the area for two years, but my roommate and I were trying to find a new apartment, because although we were not picky snobs from Rich Mountain, we decided that maybe all of our stuff didn't need to collect a fine coat of BQE soot every two weeks, and also our next door neighbor? He kind of had a roach problem? A roach problem that can only be described as Back Draft-style, because every time I went into the hallway roaches would immediately go back under his front door. And that's how you know that if you opened the door, roaches would explode in your face, killing you.

Anyway, Frank grew up in the neighborhood. He kept telling us how many great restaurants there were, which is true, there are a lot of great restaurants around here, but every restaurant he named was an Italian restaurant. Whatever, Italian restaurants are great! All of them probably! He offered to buy us a cup of coffee at D'Amico, and took us inside. "Best cup of coffee you'll ever drink," he said. When we got inside, he hugged everyone. Basically. I mean, he didn't hug anyone, but you know what I mean. Word hugs. And then he got caught up in conversation with someone, probably a D'Amico, and we had to pay for our own coffee. But that is OK. It was worth it!
— Gabe Delahaye
· Previous Editions of You May Also Enjoy [~E~]
[photo credit]