To welcome back the real Top Chef, we welcome back comedian Max Silvestri, who will be here every week to take us through season six. 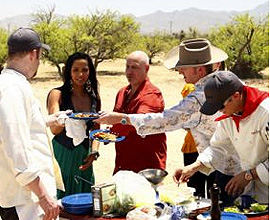 Before we get into it, I'd like to issue a correction. Last week, I said (or more accurately, animated) that Tom Colicchio was a "princess" because he ate his food with his pinkie extended. Chef Tom wrote in to say that his finger has been broken in three places, making it difficult to close, hence the extension. Boy is there quail egg on my face! I am very embarrassed, of course. I love Chef Tom, and I think we can safely assume that he did not break his pinkie trying on expensive gowns or applying gold shavings to his lady privates. (I am basically Professor Princesshead over here with all my expertise on what princesses get up to.) While there is no way to know for sure how he broke it, I imagine it was something very un-princess-like, like punching a corrupt cop or playing touch football with Ray Winstone. Or maybe it was from serving scallops and frisée salads to millionaires. Who can know! Either way, I stand corrected: Tom is not next in line to be the Queen.

For this week's Quickfire Padma is joined by Chef Tim Love of the Lonesome Dove Western Bistro in Fort Worth, Texas. There used to be a Lonesome Dove in New York, but then Frank Bruni wrote a review and said "nope" and so it closed. But Tim Love still gets to be on TV! Good for him. We should all get to be on TV, I think. He's judging the Viewer's Choice Quickfire, where some people (certainly not anyone I know) texted in to choose between rattlesnake, cactus, and kangaroo as the Quickfire ingredient. How fun! (Not very fun is the answer, if that was a question.) Cactus "won" and the chefpetitors get to work. Also, because Vegas, this is High Stakes. Another fifteen grand up for grabs.

Mike Isabella is very confident. He's going to cure the cactus with salt, like one might cure a salmon, because that is the only way to suck the goo out. Mike really stresses how important it is to suck that goo out. He has worked with it before, and sometimes he and the other cooks at his restaurant stay late and experiment with ways of sucking the goo out. It pays off, and he's one of the chefs on top, alongside Laurine and Mattin. Mattin reacts to his name being called out in a way that clearly makes Tim Love uncomfortable.

But Mike's de-gooing technique is unparalleled and he emerges victorious. He's elated at the cash. Think of how many horrible t-shirts he can buy with that money! Upwards of 50 I imagine. Or maybe he should buy doubles of the ones he already has for when women invariably throw glasses of wine in his face.

The chefs head to Whole Foods to shop for the Elimination Challenge. The twist this week is they have no idea in what sort of conditions they will be cooking. Maybe it will be a really amazing and well stocked kitchen! Yeah, everyone should plan on there being lots of tools. (With Eli and Mike around, that won't be a problem. Zing!) The chefs cannot stop complaining about not knowing where they will be cooking. More like a feature in Food and Whine magazine, am I right? As they get ready to leave Whole Foods, Jennifer yells "Five minutes!" incredibly loudly, as if they aren't in a store with tons of customers. Though it is also fun to imagine who would live in Vegas and also shop at Whole Foods. "I insist on only buying organic press-on toenails for my family."

The chefs discover they are cooking for some cowboys at an actual campsite, with only fire pits, cast iron, and a small prep area. Boy are they disappointed. What a bunch of indoor kids. They are cooking for people who work outside their entire lives, and these guys are worried about a sunburn. Eli thinks it's 14 million degrees out, "around the surface of Venus in temperature." Does that mean it's really gassy? Mike, Ron and Kevin all have guilty looks on their faces. Bryan is the only one who seems genuinely excited to camp. "As a child and a teenager, I excelled at camping with friends and family members. The stick up my butt is very useful for warding off bears." Speaking of warding things off, Ron does some voodoo to keep snakes away, because snakes apparently hate wooden foyers in front of tents. Hopefully Corbin Bernsen doesn't mess it up while Ron is busy celebrating. (That joke is for all my Major League-heads out there.)

The chefs all struggle with the cooking conditions, and that comes through at the meal. Tom spits out the uncooked cod from Mattin's ceviche. Robin's prawns taste like chlorine, and Tim Love says that Mike's pita sandwich isn't something he'd call his grandmother about. He calls his grandmother when he eats a good sandwich? "Hi Meema, this is Timmy. No, I'm not coming to visit you. I just wanted to let you know that I think that turkey and bacon go really really well together. Hello? Hello?" Padma makes quite a face at Ron's coconut cocktail.

The winners this week are Ashley, Bryan, Laurine and Michael. The brothers on top again! But Bryan demolished it with pork loin, polenta, and glazed rutabaga that did not look like it was cooked in the desert. He wins again. This is his third Elimination win in 5 episodes? Guy's running away with it. Poor Michael. He got one Michelin star at the age of 26, which he will never brag about but will certainly mention which is different than bragging.

On the bottom are Robin, Ron and Mattin. Ron's dish was mostly fine but boy oh boy that cocktail. "I don't drink!" Well then you shouldn't make cocktails for no reason. Robin and Mattin's dishes were both fishy nonsense, but Mattin makes the classic mistake of not even realizing why he's up there. Don't sweat it, Mattin. You do not have to be up there again. Goodbye. Ceviches for life.
—Max Silvestri