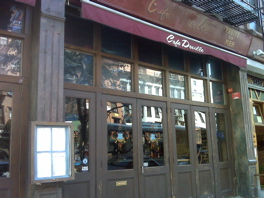 Yesterday evening Community Board 3 convened for an epic 7-hour liquor licensing meeting in a senior center on The Bowery. As the hours passed, several applicants set for the end of the agenda gave up on waiting, while others stuck it out to learn their fates. In the end, many went home approved, and some unlucky applicants got the hammer.

1) The owners of the proposed 19-room, 170-capacity Karaoke Boho at 196 Orchard were denied. A majority of board members saw no public benefit from having a karaoke "monstrosity" opening in a resolution area, especially one that wants to open at 8AM on weekdays. Eggs benedict and "Hey Jude" singalongs, anyone?

2) The folks applying for a transfer for the Cafe Deville space received approval. The only stipulations proposed by the board do not allow for live music and set that the establishment must be run similar to the owners' other establishment Phoebe's, the tavern/sports bar on 4th and Bowery.

3) The team behind Meatball Shop at 84 Stanton gained quick approval for their project, which will be exactly what you'd imagine: a place that serves all types of meatballs (beef, chicken, vegetarian, salmon).

4) The two men behind the catering company Feast On Us will be opening Rushbury, a locavore Brit restaurant, on 17 Orchard. The board approved.

5) Based on the fact that there are 19 licenses already on the same block, the board denied plans for a new St. Mark's Pl. Ramen Setagaya.

6) Reps for Sushi Hana at 111 Rivington, who have attended three straight meetings on account of the fact that there have been small, bureaucratic errors with their applications, were denied once and for all based on the fact that they are in a resolution area. Pretty sad stuff, if one takes into account the fact that there's no way a place like this adds to congestion or promotes rowdiness.

7) The chef taking over the Le Pere Pinard space on 175 Ludlow was denied based on the fact that his space is in a resolution area. He hopes to open a French bistro with his wife.

8) Le Cubain (formerly Casanis) at 81 Ludlow was approved, even though board chair Alexandra Militano made clear her problems with the fact that the owner is running Chloe out of the basement, a bottle-service spot that is basically a separate entity.

9) Heather's Bar, which was under renewals with complaint histories, was by the far the most contested application of the night. The community came out in full force (signs reading "NO TO HEATHER'S BAR") to explain why they believe the owner is negligent and the space is a detriment to the neighborhood. Critics point to an overwhelming amount of noise and smoke, as well as Heather's inability to tackle any of these problems effectively. The owner of the space insisted that she has done everything to satisfy neighbors and comply with community board stipulations, but that it "doesn't seem to be enough." The fact that the establishment is on a side street only makes matters worse. The board agreed to hold off on a vote until the residents and the bar owner set up a meeting to attempt to work out their problems.

10) The team behind Home Sweet Home at 131 Chrystie, a contemporary art gallery with a taxidermy-heavy, dance-happy basement bar, were present to request an extension of the license for the top gallery floor. Seeing that the establishment is not in a problem area, the board voted to approve the application.

12) The Zaitzeff family was on hand to explain a peculiar and unfortunate transfer situation: for the past two years the owners have been trying to resolve an SLA violation that was brought on when the space went from High Chai Restaurant, a teahouse, to Zaitzeff, a hamburger spot, without getting authorization from the board. Oddly enough, the SLA has not settled with the owners or informed the board of its stance on the item, placing Zaitzeff in a sort of purgatory, since the board does not want to act on the application without having all the facts on the table. The committee will be contacting the SLA to get a written report on the issue so that they can vote and hopefully resolve what is a minor violation.

13) The other four renewals with complaint histories (Kion, Absinthe, Local 138, and Cafe 81) were approved, since the board didn't see egregious violations from any of the owners.