Last night on the rooftop of a loft in the far reaches of the West 30s, Chef Eric Ripert and Grey Goose hosted friends and media to celebrate the premiere of "Avec Eric", the master chef's new PBS series about his worldwide food adventures. As one of our tablemates described it, it's the anti-"No Reservations", in a good way. Seated at the head table: Chef and his wife, Sandra; Martha Stewart, plus one; Melanie Dunea and Nigel Parry; Paula Froelich, the one and only; and Simon Cooper, President & COO of The Ritz-Carlton Hotel Company. Other notable guests included Tom Colicchio, Dana Cowin and Gael Greene. Though quite lovely, the setting, evening and food, it was also quite windy; it was no place for massive and top-heavy lucite and topiary centerpieces, of which one came within an inch of taking out Martha Stewart. Ever the consummate decoration expert, Martha had wondered just before the Topiary of Doom crashed, "these things are tied down, aren't they?" Post-crash, before you could say escolar, she was gone. 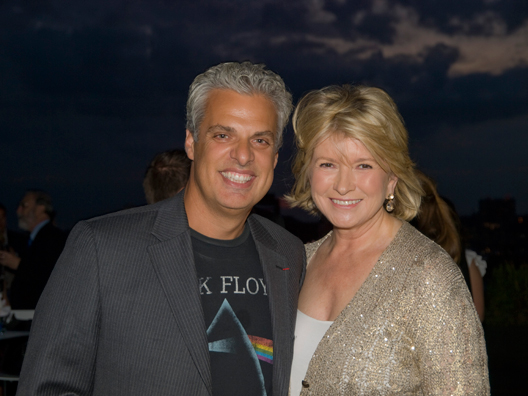 Eric Ripert and Martha Stewart, before the fall.