Share All sharing options for: The Shutter: Planet Thailand, Il Bordello, and More

Welcome to the Friday shutter. Know of any other restaurant that has served its last? Let us know. 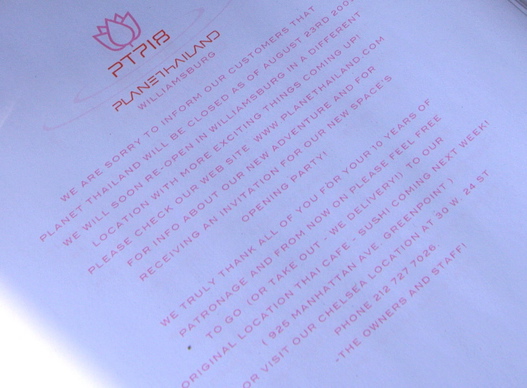 1) Chelsea: Sad news about the short lived spot Il Bordello from the tipline: "I walked by the cursed corner of 10th Ave & West 23rd Street this evening and saw that Il Bordello was closed. A bill was stuck in the dark restaurant's door. I asked at the Don Giovanni pizza place if they'd shut down, they didn't know. I'm actually surprised this place lasted 10 months, given that almost no one ever ate there." That space is confirmed restaurant-killer. She never had a chance. [ShutterWire]

2) Williamsburg: According to the above letter, the 10 year-old Planet Thailand at 133 N 7th St (between Bedford Ave & Berry St) closed on August 23rd. Silver lining: the shuttered outpost hopes to reopen elsewhere in Williamsburg soon. In the meantime, the Greenpoint and Chelsea locations remain open. Note, Planet Thai opened in Williamsburg long before there was any dining scene to speak of. [Flickr]

3) Clinton Hill: From a reader: "I went to Choice Atlantic this morning and was greeted with a sign that it was closed and a suggestion to hit Choice on Lafayette." A call to the Clinton Hill location confirms the shut-down is temporary, but the employee we spoke with couldn't provide the reason or when they would reopen. [ShutterWire]
—Leah Herman