You May Also Enjoy: Gennaro

Share All sharing options for: You May Also Enjoy: Gennaro

To get everyone through the dog days of summer, we've asked a handful of New York City literary types to write about a favorite, somewhat oddball restaurant, bar, or place of note that perhaps exists mostly off the radar. Here now, Sloane Crosley, author of I Was Told There'd Be Cake. 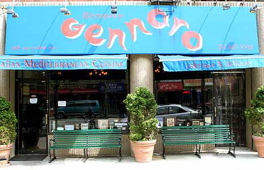 Gennaro only takes cash. And the tables wobble. And it's cramped with bad art. And it has a very Q-train-esque reservation policy—if you hit it at the right time, they will seat you instantly. If you don't, you will be shipwrecked on an Upper West Side sidewalk for an hour. But it's all worth it for the best pasta I have ever had in New York. Absolutely everything on the menu is fantastic and the place has been in on the simple-but-perfect food movement since my first trip there 10 years ago. Gennaro does things to eggplant that would make other eggplants weep if they discovered it was possible to be cubed and oiled with such dignity.

The waiters also memorize such an extensive list of specials each night that it borders on parlor trick. You can't help but zone out with the endless list of oysters and lasagna and pear salads, snapping yourself back only to think: seriously, how is this guy still talking?

For me, Gennaro is also one of the few emotionally untouchable restaurants I can think of. I first went there with a bunch of friends from Columbia for a suitemate's birthday. We lost track of the courses, shut the place down and then took a much-need walk north. So that's a purely pleasurable memory. Since then I've eaten there with just about everyone I've ever dated. But no matter! I'll go back with anyone anytime. I'll go tomorrow. I’ll go now. Gennaro is so awesome that it’s immune to weirdness. My nostalgia drowns in perfectly balanced tomato sauce.

Actually, a review of Gennaro is also the first thing I ever wrote that got printed in a book. In 2005, I edited the "upper west side" section of the Black Book Magazine guidebooks. Because Black Book was (as it should have been) run by people who didn't know anyone else who lived in my neighborhood, they asked me. My first order of business was to add two new entries: 1) my local coffee shop for the shout-out and the naked-angling-for-free-bagels-with-tomato-and-cream-cheese (Muffins Café, are you listening?) and 2) Gennaro. Because it seemed like I would actually make people's lives better by insisting they go there. I still think that.
—Sloane Crosley
· Previous Editions of You May Also Enjoy [~E~]
[photo credit]