Top Chef Episode 2: "The Hangover" but Without the Funny or Interesting Parts

Share All sharing options for: Top Chef Episode 2: "The Hangover" but Without the Funny or Interesting Parts

To Welcome back the real Top Chef, we welcome back comedian Max Silvestri, who will be here every week to take us through season six. 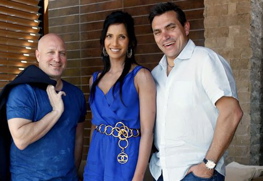 We are back in Vegas, everybody. Did you forget for a second we are in Vegas? Here are some casinos and slot machines to remind you. My cable box description for this episode is "Bachelor Party" so you know we are so money and we don't even know it, or something. I hope in one episode this season they go to swing dance camp. That's a really Vegas thing, right? Or maybe they can go to the Bunny Ranch and make food that pairs well with how sex smells. Who knows! What pairs well with Ed Hardy shirts? Poison? Let's cook that. 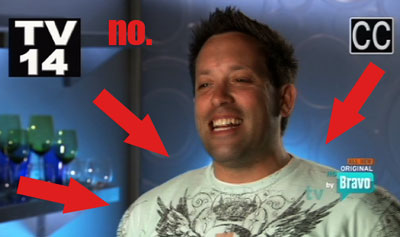 The opening montage shows everybody getting ready for another big day of cooking. Get that faux hawk perfect, Eli! What is it about chefs that they love faux hawks so much? So many faux hawks. "I like that one part of the hair is taller than the other parts and it also lets me work with my hands, which has always been a dream of mine." Eve thinks she is on a different Bravo reality show, Blow Out.

This week's Quickfire features guest judge Todd English, who is good at being on this show and also having restaurants close on him in New York. Chef English is standing in front of a craps table. It is the closest Kevin has ever been to one, and he reacts by still having a beard. The challenge is that sometimes chefs have to cook from their cupboards, but who knows what's in your cupboard? Well, the number of ingredients in your cupboard is determined by the roll of two six-sided die, so see how big your cupboard is by playing craps with your ingredients. Huh? We get it. Gambling. Enough. Here is a sneak preview of the Quickfire in two weeks:

"We all know Vegas loves food, but not as much as its neighbor to the south Texas, where they love their dinners so much they hold 'em. That's why we are playing Texas Hold 'Em this challenge to see who wins the Teal Chip, which the winner can play in the Immunity Slot Machine. Line up three Tom Colicchios and you are safe this week. Line up three Toby Youngs and you have to fill your mouth with hot garbage. But first, let's draw our final community ingredient card, known as the river, to fill out your kitchen hand. As we know, fish swim in rivers. It's a Queen! You must cook with the bass, the Queen of the Texas Rivers. And go!"

Jesse makes scallops, saying, "I get nine ingredients, so immediately I think of scallops." Hah, yes, because "scallop" is synonymous with the number nine. Can you believe how many movies are coming out this year with "scallops" in the title? There is that animated Tim Burton movie The Scallops, and then that musical Scallop, and of course who can forget District Scallops. Oh wait, the aliens in that movie looked like prawns. I think Jesse is confused? Or maybe I am.

Todd's least favorite dishes are Bryan's, Eve's, and Jesse's, whose nines, he says, needed a sear. "They were bland," but he says it like "blonde." It is silly. I know you are sort of from Boston and your name is "English" but that doesn't mean you get to talk like that, Chef.

The lovely (not lovely) couple want their parties catered separately, but at the same pool, and want snacks paired with shots. This couple is great! I hope they have so many children. In fact, thousands of years from now, I hope everyone is descended from this couple because that's how chill they are. They are the new Adam and Eve (in my dreams).

Also, apparently catering a bachelor/ette party is the time to take a weak stand on issues. Jennifer, ridiculously, is mad they are split by gender. "It doesn't matter if you are a boy or a girl." It doesn't? What? "We should all have to wear masks and jumpsuits and cook with our feet because it doesn't matter if you have hands! Toes are the same as fingers and I'm dumb." But it was cool when they were split into color-based teams last week? Whatever.

And Ashley, boy is she fired up. She is gay, as are a number of competitors, and she is very uncomfortable cooking for a patriarchy party when she and so many people she knows can't partake. Alright, a couple things. First off, fair enough, Ashley. It's ridiculous you and your partner don't have the same rights as a married couple! I am sorry. But remember that you and your partner are welcome to have a bachelorette party. They are stupid and there is no law saying you aren't allowed to walk around Second Avenue wearing fake tiaras and making strangers take pictures with you so you can win a terrible scavenger hunt or whatever. Secondly, do you get mad when you are asked to cater a bar mitzvah because you are not a 13 year old Jewish boy? Finally, this is a reality show about cooking. You should be mailing flyers out and trying to get legislation passed if you are so mad, and not drinking beers on TV and trying to win a Poker Chip with Gail Simmons' face on it so that you can use an extra lobster in the Elimination Challenge.

The boys and the girls set up and cook some stuff for the chode-y guests. Padma shows up in a banging onesie along with the other judges and they get to eating. It is funny to think that the judges basically have to take six shots in the course of trying the food. I don't think Padma is like "I will only have half this shot." That is not her way. The guys' food fares far better than the girls' food. The judges don't think Eve's shrimp ceviche thing is cooked well, nor does it pair with the shot. That is strange, because Eve says she got her degree in wine & spirits. What a chill college that must have been. Also, and I couldn't believe this, Jennifer found a way to say "saVEECH" *again*. Incredible.

With their food served, the guys decide to jump in the pool because that's what you do when you finish a catering job. The clients really enjoy mingling with the help underwater. Definitely. One of the girls asks, "Who would you rather see in the pool with their shirts off? The girls, or the Fat Boys." The Fat Boys! That is a movie that needs to be made now. They are always getting up to no good, those fat boys.

During a commercial interlude, we learn that Mike has some nonsense names for the other chefs. He is the Christian Audigier of nicknames. Eli and Kevin hang out, so, "they are like two pickles in some brine." Sure. Sure they are. Eve is a ninja, because "she walks into walls and stuff." That is not what ninjas do, Mike. They climb over them? Maybe you are thinking of wizards, or Nightcrawler. Preeti's nickname is Purty because he can't remember her actual name. Gold, Mike. "I call Ashley Rockethead because she took off to go to the bathroom and I call Bryan Vampiretown because he cut his finger."

The chefs nervously wait in the Gladware Supply Closet for the judges to call them on. Mike breaks the tension by asking, "You bringing home the gold?" Jesse says, "Like Michael Phelps, baby." AHAHAHAH everyone laughs so much and for so long, it's crazy. What a good joke! Michael Phelps won a lot of gold medals, you see, so what Jesse is saying is definitely. Maybe the joke is that there is no way she is bringing home any? In which case, I get it.

The judges call in the best chefs on the winning team, Bryan, Hector, Eli, and Michael. It is between the two bros! Michael wants it so bad he can taste it and Bryan wants it so bad he looks like he might shatter into a thousand pieces. But Bryan wins. Nicely done. Bros are even. Bros be bros.

Eve, Jesse, Preeti and Ashley are on the bottom of the losing team. Eve says a bunch of dumb things to defend her dish. Ashley gets chastised for making the second dish. It seems to be between Preeti and Eve. Preeti doesn't get why her terrible dish was bad, and Eve doesn't get why food tastes like food and bee stings have to be so ouchy. But boom, Eve is gone. A shame. She is fun to write about! But this is Top Chef, not Top Blowdry and Put Pieces of Popcorn Where They Don't Belong.
—Max Silvestri