Share All sharing options for: EaterWire: A Bar with Swings, TOTG Delays, More!

It's hot. Eater is taking a rare summer Friday. Enjoy the weekend, everyone. 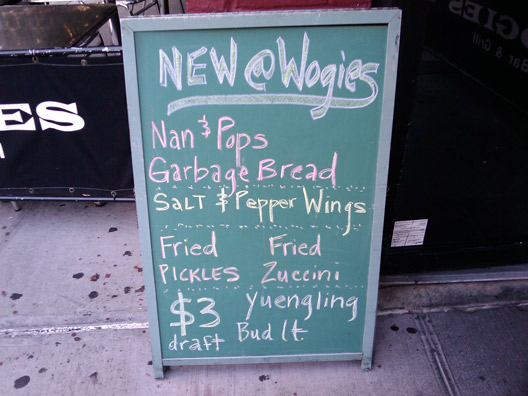 CENTRAL PARK— The main bidders to get (or retain) the lease for the Tavern on the Green are pissed the Parks Dept. is waiting so long to make their decision. Back when the authority requested bids for the famed Central Park space, they said a decision would be made by July. [NYO]

FIDI— A tipster has a report on Iron Horse Grill, a new divey place in FiDi: "I went to the opening of this bar last night because my best friend used to bartend at Red Rock West (where the owner was a bartender for years)...as of last night it is open. There are swings over the bar and ladies with attitude. Just FYI!!" [EaterWire]

'BUCKSWIRE— Over at Starbucks, the Sorbettos are now officially the short-lived Sorbettos. The coffee giant has already discontinued the "Pinkberry-inspired" smoothie-fail. Meanwhile Starbucks is lowering its prices for the first time ever (now there's a thought). However, fancy drink prices will actually get higher by as much as a quarter. [Reuters via Eater SF]