In the Shitshow Week Spotlight: At Vermilion

Share All sharing options for: In the Shitshow Week Spotlight: At Vermilion

In preparation for Shitshow Week 2009, we asked readers to send in nominations for the city's worst shitshows. Since Chicago import At Vermilion received by far the most nominations, we'll be running a reader letter every day. On Friday, get ready for the full Eater assessment. 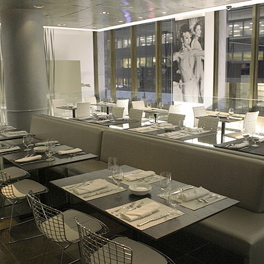 Some excerpts from At Vermilion Nomination #1 which, if it can be believed, was far too long and disparaging to reproduce in full here. It comes from an ex-employee wanting to share "the utter chaos that is this place":

During the first two months of operating they went through, count them, four general managers!!! Each one literally lasted the most two weeks and they just quit by phone or email, or better yet one never even bothered to show up anymore. I have heard of waiters or cooks doing that, but a GM just never showing back?! So in January they decided to give up GM's. At this time they had one assistant GM who was basically doing everything himself. But even he had his limit to how much crap he got and he left in January.

The pastry chef, by the way, quit after 2 months also. Now they have just decided to operate with no pastry chef, since really the crap they do could be made by a trained monkey. So now they just produce en mass and send desserts from the pantry station.

On the food and PR:

The food is a disaster...Oh, by the way, they have already parted ways with their PR company, Bullfrog. They sent representatives several times to have tasting and every time they were not impressed at all, I am sure they just didn't want to be associated with this place anymore because it's be bad for them.

The plates are these ridiculous huge blocks of cheap material which honestly no one can carry more than 3 of these things. Nothing fits at the table, and like a reviewer said, it's like playing tetris when you try to accommodate plates in a little 2 top table.

...the owner and chef claimed that they expected 3 stars from the NY Times!!!! This was just laughable. I have worked at truly great places, and even some of those have earned just one star. I always said Frank Bruni would not even waste his time coming to a cheap corporate train wreck like this.

And to close: "It is truly depressing to be working a Saturday night in a 200 seat restaurant and have just maybe three tables sat at 8 p.m."

Please send any further Shitshow Nominations or a defense of any nominated restaurant to tips@eater.com
· All Shitshow Week Coverage [~E~]
[photo credit]