Welcome back to the Eaters' Journal, in which we opine on meals of the week past, now with some help from Friends of Eater. 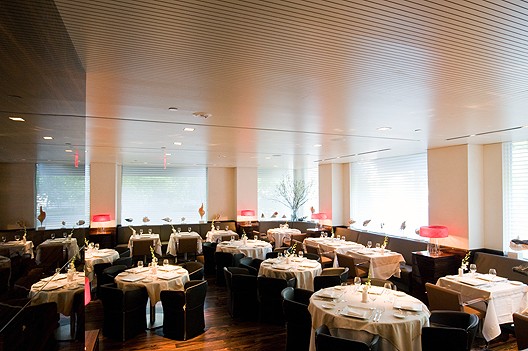 Veloce Pizzeria: Given so many trusted authorities have filed on the superiority of the square pies at Veloce Pizzeria, I'll give them the benefit of the doubt and assume my party went on an off night. Service was painfully slow to the point where waving down servers became a necessity. The mushroom pie had little to no salt, and to be honest, the pizza was enjoyable in that super heavy, tasty-but-not-particularly-complex way that is reminiscent of Uno's or Pizza Hut's. And just to be a total curmudgeon, the music was too loud, the prices too high. If Easy Ed and Frankalank say it's killer, it probably deserves a second chance. But with Motorino opening up the block, I don't think it will get it.—Kludt

Marea: In the house at Marea on Wednesday night: Kanye West, Lyor Cohen, Tory Burch, Jean-Georges, David Gergen (not all at the same table). On Thursday, there was a much different crowd in the dining room, but Michael White's food was stellar including lardo-wrapped sea urchin crostini and long ferratini noodles with tons of clams and chile. Lobster with ultra creamy burrata and eggplant has now replaced fusilli with octopus and bone marrow as my favorite Marea dish.—Kate Krader

Barbuto: I visited Barbuto a mere couple of hours before the airing of chef Jonathan Waxman’s loss on Top Chef Masters. But in the cozily cloistered world of the far West Village, you couldn’t smell the whiff of defeat. It was one of those perfect summer nights that Barbuto seems to have been made for. We were seated just beyond the retractable garage doors, overlooking a sparsely trafficked tree-lined block, and the restaurant was packed. I started the meal with a deliciously tart glass of Umbrian white wine, followed by a dish of browned potato gnocchi with blistered cherry tomatoes, sparsely coated in a gooey cheese sauce. What followed was Waxman’s famous roasted chicken, which delivered on its promise. It was dressed in a hoard of leafy salsa verde and languished in a pool of green-tinted jus. Dessert brought an equally rustic yet elegant polenta short cake with fragrant sliced strawberries and cream. Waxman may not be reality show material, but he certainly has what it takes to make a restaurant great.—Gabriella Gershenson

Ciao For Now's strawberry lemonade: Though primarily known for serving up the java, it can no longer go unmentioned on the Interweb (with Eater as the conduit) that the East Village's Ciao For Now has The. Best. Strawberry. Lemonade. In. The. WORLD. It is the the perfect combination of sour and sweet, a delicate balance often fudged by other contenders to the Top Flavored Lemonade throne. The strawberry lemonade is like the light at the end of the tunnel, with the tunnel being the 12th Street sidewalk that always smells like baked dog piss (at least when walking from Avenue B). Only complaint: It comes in just one size, mediumish. C'mon, Ciao For Now, some of us like to DRINK our calories!—Arak

The Ear Inn & DBGB: Why this unexpectedly genius pairing, you wonder? Burgers. They both have excellent burgers. As simple as that. I'd take the Ear Inn for its ambiance (homey and divey to DBGB's fast-casual look), size (Ear Inn's meaty burger has to be twice the size of DB's dainty patty), and price (half as much) over the other any day; but if fries and sausages are what you're after, the Ear isn't your place. Get a schmancey beer, a Yankee, and some links courtesy of D-Biggity.—Kludt