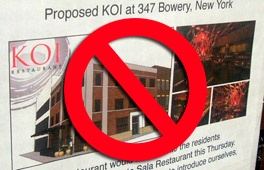 Last night Community Board 3's all powerful SLA Licensing Committee gathered in a brightly lit senior center to mete out the fates of a group of restaurant and bar owners begging for a chance to survive. Motorino and Mason Dixon walked away victors, while others—ahem, the army of Koi reps—returned home vanquished.

1) The surprise of the night that wasn't really a surprise was the unanimous denial of Koi's application for their proposed location at 347 Bowery, in the building that formerly housed The Salvation Army and a men's shelter. The Koi posse, which consisted of the two owners, one of their New York general managers, a corporate executive, and the real estate agent managing the deal for the 6,000 square foot space, came in to present the application, claiming that the upscale restaurant would not be a nuisance.

The board and the community were having none of that, quickly calling attention to the hot mess that is the Bowery on the weekends and pointing out that a neighborhood where the median income is $31,000 will not benefit from a destination spot like Koi. The frustrated Koi people threatened that if they don't get approved the building will be abandoned, or worse, will become a huge condo/hotel build up. Jeremiah Moss has a little more on how this convo went down.

2) The transfer app for Motorino passed smoothly and quickly. The East Village outpost will be taking over the Una Pizza Napoletana space at 349 E. 12th St. and plans to extend hours (11 AM to 2 AM) and open daily, which compared to UPN is a pretty great deal. Word on the street is they want to open as quickly as possible and we should expect a mid-August debut.

3) The No Brainer Rejection of this meeting was without question the joint application from the owner of Rama Cafe and Cafe Hade Bade. According to Board Chair Alexandra Militano, who provided plenty of documentation and didn't spare any details, Rama Cafe's "Hot Date" special, in which gentlemen are given non-alcoholic drinks and condoms while their female companions get plastered, has lead to several issues more alarming than the oh so classy promotion: an underage female was sexually assaulted one evening, and the proprietors of Rama have allegedly been using a back room with beds (not in their original OP) as what one could call the "seal the deal" room. As for Hade Bade's mishaps, a recent visit by police yielded 30 fake IDs, something the owner tried to pass off as an "isolated incident."

4) Mason Dixon's renewal app provoked the most contentious debate of the evening, running nearly an hour. It looks like things have gotten pretty ugly between the bar owner and many of the residents of the building at 133 Essex, as the two parties are actually in the middle of a lawsuit. The residents allege that the bar doors are kept open past 10 PM and that the live music and DJ'ing create way too much of a disturbance, while the owner insists that the doors have been closing on time and that he's soundproofed the location thoroughly. Seeing no record of police activity and realizing that it's probably not terribly objective to consider complaints from people who are in a lawsuit, the board chose to renew the license.

5) Cafe 169's application to extend their liquor license to their backyard was rejected unanimously on the basis that it would create way too much of a racket in a neighborhood "filled with kids and elderly people." That the owners did not budge on their wish to have the courtyard open all day pretty much sealed the deal.

6) La Meridiana, Jehan LLC (a new "asian fusion" restaurant on Orchard St.), The International Bar, Recoup, and Guapo Bodega all got the go ahead from the board.

8) Allen and Delancey's lawyer had to request a withdrawal of the restaurant's upgrade application because the owners were dealing with a family emergency.
— Gabe Ulla
· Previous Editions of First Word [~E~]