We'll be back with a few posts tomorrow morning, but this'll be our last big newsdump before Monday. As such, do buckle up for this most important EaterWire. 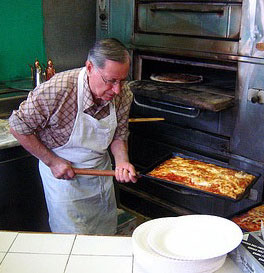 MIDWOOD—Slice has the scoop on yet another temporary closing, this one of revered pizza shrine Di Fara. The word: "The pizzeria was indeed closed, but Dom DeMarco (right)'s daughter, Maggie, was there and reports that her father was at the doctor for 'minor mouth surgery.' No word on when the place will reopen." [Slice]

UPPER WEST SIDE—An alert Eater reader emails, "Prices at H&H Bagels on the Upper West Side went up AGAIN to $1.40/bagel. Seriously. I wonder if this is because they couldn't pay their taxes." [EaterWire Inbox]

MIDTOWN—Could this be final, definitive word that La Bonne Soupe, felled by fire back in March, is reopening? Word from the restaurant is that Saturday is the day. [EaterWire]

LITTLE CHITALY—The Mott, the endlessly forthcoming venue in the old Double Happiness space, finally kicks out some PR blurbiage confiming the exit of the zany, one o' a kind Emma Cleary from the project. "She is no longer involved in the project and the partners are releasing a statement," reads a missive in our inbox. As for the statement, it's a genius takedown: "In the two years that this project has been underway, Cleary has failed to achieve virtually every milestone, despite numerous assurances, forcing the investors to take over active management of the buildout, launch and operations of the venue. Over $2 million was funded by investors who are at a loss after numerous promises, excuses, and inaction." Meantime, "The restaurant is set to open soon." [EaterWire]

FLATIRON—"Jay Z’s 40/40 club, Rated top for Sports Bars in Zagat’s 09/10 Nightlife survey, has announced today that they have updated their menu!" reads another excitable press release in our inbox. "They not only have added key sandwiches, wraps and salads, but also a full NEW entrée section." MY GOD, PEOPLE. DO YOU BELIEVE IN A LOVING GOD? Sample dish: "Penne Pasta with Sautéed Chicken $16. In a tomato vodka cream sauce." No, sir, we do not. [EaterWire Inbox]

TRIBECA—Fresh off its onespot at the hands of Frank Bruni, Terrance Brennan's Bar Artisanal adds a late night menu. "Help your readers hang out late at night with a cocktail and great food like the Platter of Fromage et Charcuterie or Pissaadieres," urges this fiery press release. Alright. Menu below; the hours are Monday-Saturday, 11pm-1am. Do enjoy, and happy long weekend. [EaterWire Inbox] 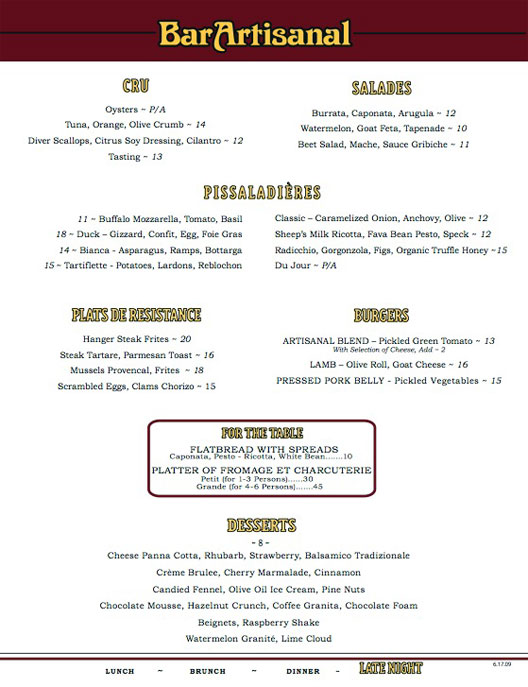