DOH Shenanigans: Nothing to See at The Elephant

Share All sharing options for: DOH Shenanigans: Nothing to See at The Elephant

East Village: Ever since the Dept. of Health began putting up their reviled bright yellow stickers after closing down a restaurant, sneaky restaurateurs have tried to hide them. They pull their gates down, cover their restaurant in yellow signs advertising specials, hide the notices under pieces of wood. Now serial offender and menace to little girls, The Elephant has come up with their own way of hiding their misfortune. Real clever, guys.

And for some bonus fun, a tipster sends in a photo of a more standard practice ahead: 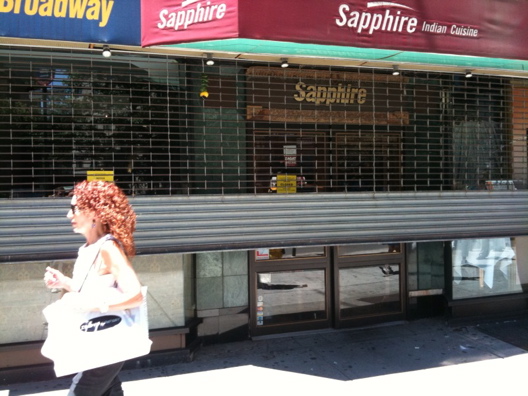 "Sapphire on columbus circle was shut down yesterday by the health department. Today, coming into work I noticed they came up with a pretty creative way to hide that fact. They pulled their gate down about half way just so the large solid steel part at the bottom would cover the yellow health department signs. They also posted an older fellow in a suit to stand outside the gate all day and answer (lie) people's questions. Pretty funny stuff."