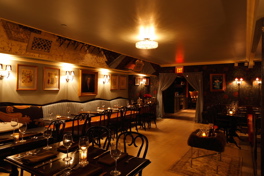 Today we turn the radar to three candidates: a relatively suspicious comment on newcomer Hotel Griffou, a yelp rave for Yorkville Creperie, and a Citysearch post on Zanzibar.

"The only thing I can say right now is that Zanzibar is one of the best lounges in New York! The interior design makes me feel like I'm in Africa in a tropical island! I passed by it the other day and i talked to the manager and he told me that they are making a night club downstairs called Jeje and a Paninotecha on one half! I'm so excited for these constructions to be over like this I can once again go and enjoy my self! i highly recommend this place for anyone visiting or living in New York! I LOVE IT!"
Shill Probability: 64%

Next up is a comment left on an Eater thread concerning the newly opened Hotel Griffou:

"Rumor has it that the 'summer in the city' types were Barbara Bush and entourage...Ate there as well on Saturday. The lobster thermidor was sensational, the duck confit poutine to die for, and the laissez faire, unobtrusive staff were a welcome change from the overbearing predecessors of restaurants recently opened. Sometimes it's nice not to be rushed through dinner..there are plenty of restaurants turning tables at exorbitant prices and indigestible speed which might be more up your alley williamglenn..."
Shill Probability: 77%

A tipster writes to warn of "a monster of a shill" for Yorkville Creperie. It's from a brand new Yelper who seems to know everything about the place; the user posts three pictures, lists the ingredients to his favorite crepes, and includes a tip from the manager about future plans for music. Here's the full review, replete with smiley conclusion:

"I live in this neighborhood and was thrilled to see this place open almost two months ago. I think the rest of the neighborhood agrees, because I noticed they've been nothing but busy since they opened and had to work out some growing pains... but I'm happy to report the crepes are wonderful and it's great watching them made. They've added a very nice wine list, and it's been fun trying all the different varieties of crepes and paninis they offer. The staff is attentive and friendly and while I agree, crepes seem to take a bit more time than say, a slice of pizza or a fried up something....everything looks great and tastes extremely fresh...You can't go wrong with any of the paninis, but the Picnic Panini (Turkey, sliced apples, brie and caramelized oninons with a little balsamic) and the Uptown (Chicken, Mozzarella, Sun Dried Tomatoes & basil pesto) are my favorites. (they make the pesto fresh and you can tell.)...I probably shouldn't have even written a review so I could keep it 'our' secret, but I think that if someone looked at only these reviews right after they opened and experienced a tidal wave of business they hadn't expected, they'd miss an opportunity to try this wonderful place. The manager says they are adding live music (accoustic, I believe) so for those of us who don't necessarily want to leave the area for some nightlife, this sounded promising. :)"
Shill Probability: 91%