Welcome to Tipped Off, a new forum for complaining about, discussing, and shedding light upon service charges throughout the city. 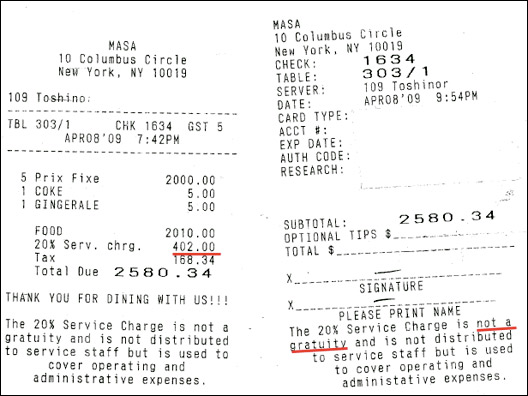 Back in April, a reader voiced a complaint about Masa's confusing mandatory 20% service charge, a fee added on to all checks that is stated in writing to be an "administrative" charge and not a gratuity. The reader, like many other diners, added an additional 20% to his $2,000 meal to make sure the waiters were covered. But after learning the whole mandatory charge practice is illegal in the eyes of the Department of Consumer Affairs, he filed a formal complaint and demanded a $402 refund from the restaurant.

Two months later, his money has been refunded, and according to the DCA, Masa has been warned and asked "to cease such practice immediately."
· Tipped Off: the 20% House Charge at Masa [~E~]