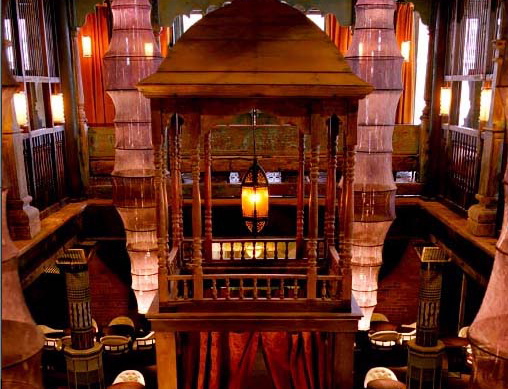 This week, Frankie Two Stars gives a re-review to Jean-Georges Vongerichten's Spice Market, a restaurant that won three stars from interim critic Amanda Hesser in a controversial '04 review. Why the controversy? Oh, it was no big thing. JGV just blurbed her book, a kind of vital fact she forgot to mention. (She pulled a similar stunt in '07.) Anyway, it's been five years, the place is still shockingly popular, and Bruni's got the itch to weigh in. Below, we seek your opinion on what he'll have to say about Spice Market. And after the jump: background and critical history. [Spice Market, NYT, after 8 p.m.]

Background: One of the most successful of the MePa big box operations, Spice Market opened five years ago—back when MePa smelled like meat!— and has been duplicated around the world. It's a pricey, gourmet, loud downtown NYC take on Asian street food. A major stumbling block here: Bruni doesn't have a history of playing nice with JGV, as evidenced by his scorcher of a double demotion three years ago for Vong and Mercer Kitchen. He could be here to maintain the three... or he could be out for blood.

Previous Reviews: The big guns filed way back in '04, so as far as recent assessments go, they're few and far between. The more recent write ups are coming from the blogs and untrustworthy Yelp.