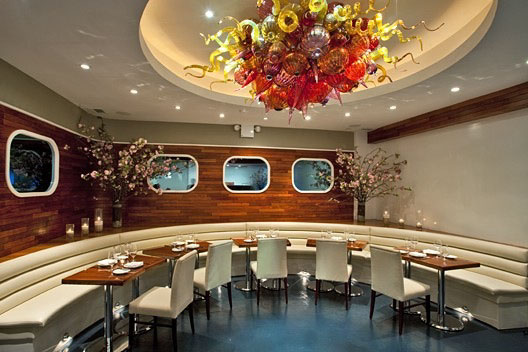 This week, Our Man Bruni sets sail on a twofer review. Uptown, he's dropping by the outpost of Flex Mussels on the Upper East Side, which opened way back in November. Downtown, over in the land of the Ear Inn, he's dining at quasi-gimmicky seafooder Harbour. Below, we seek your opinion on what he'll have to say about Harbour and, after the jump, your prediction about his starcount on Flex Mussels. Also after the jump: background and critical history on both. [Harbour & Flex Mussels, NYT, after 8pm]

Background: Neither Harbour nor Flex Mussels has been what one would term critical darlings; indeed, Flex Mussels—a name one suspects Frank will take some enjoyment from—is part of a mini-chain by way of Prince Edward Island. But Flex has indeed ramped up the seafood options beyond mussels, making its twinning with Harbour a plausible seafood double-dip.

Previous Reviews: For Harbour, Restaurant Girl served up three stars out of five, while Platt gives it two out of five, with evident unexcitement for the restaurant's prospects. Among those who've deigned to report on Flex Mussels, Robert Siestema liked the title fare enough, but cautioned, "If you don't like mussels and fries, you might as well shoot yourself." Tables for Two seemed more charmed.