Coop Neighbors Up the Ante With More Soiled Undies

Share All sharing options for: Coop Neighbors Up the Ante With More Soiled Undies

In the ongoing guerrilla campaign against the Cooper Square Hotel and its noisy terrace bar, the neighbors living mere feet away have yelled at bar goers through a megaphone, played comedy routines through loudspeakers, distributed homemade videos, and made copious complaints to the city and the press. Oh, and they've hung soiled underwear right by the terrace, now called the "lingerie line of defense" by 1010WINS.

Today, we noticed that a whole new, and more extreme, set of delicates are out to dry, along with a bonus Yes We Can T-shirt. According to Jeremiah Moss, it's a replacement clothesline for one broken by a falling air conditioner: "Foul play? Karmic retribution? Or just a couple of loose screws?" We present, the average bar goer's view: 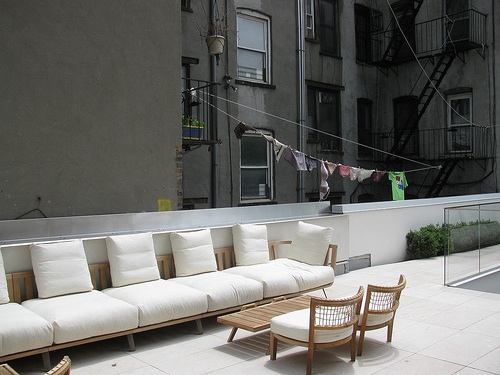