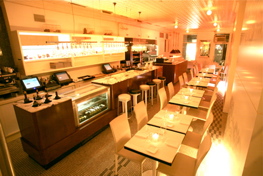 Last night Community Board 3 met to deal out the fates of restaurateurs and bar owners, finally giving Jesse Hartman a break after lobbying the community for months while cracking down on Iacopo Falai and the owner of a new taco joint. A summation of the four hour long session:

1) The biggest news of the night was Jesse Hartman’s (Two Boots, Mo Pitkin's) successful presentation for 365 Grand St., the old Isabella Oven space: the measure passed unanimously. Hartman thoughtfully responded to board member concerns about noise and other possible problems, presenting architectural drawings of the space and explaining that the restaurant’s glass enclosure, one its main features, would not disturb neighbors. In fact, Hartman seems to believe, “even though it sounds like BS,” that the “completely soundproof” triple-plexiglass enclosure might actually help matters in a courtyard with a configuration that currently exacerbates noise from sirens and nearby traffic. Over ten members of the community presented themselves to speak in favor, claiming that they live in “a culinary desert” and desperately need a reliable place that’ll be open all day and late into the night (Hartman plans to close at 4 AM).

2) It was nice to see Michael Huynh in the house, who was applying for a transfer for his new restaurant Bia at 154 Orchard St., in the old Jeeb Thai space. Huynh didn’t talk much about the food, except that he plans to serve “Vietnamese sandwiches and noodles,” so it’s hard to tell if and how the restaurant will differ from his other places. After a couple of minutes of deliberation, the committee voted to unanimously pass the measure.

3) Yesterday evening’s community board pet peeve was without question restaurants in resolution areas, and Clinton Street's Falai unfortunately fell victim to the intractable whims of certain board members. Falai came in to apply for an upgrade to their current beer and wine program and were ultimately shot down for reasons that escape us. Committee Chair Alexandra Militano and member John Fout seemed to overlook what Falai is all about, citing fears that the restaurant might come back in the future to extend its hours if it does not benefit from the upgrade, even though the rep and owner demonstrated that it’s a well-respected restaurant, strictly geared toward fine dining, that has never had a complaint filed against it. A small majority of board members (the vote was 4 to 3) decided to “side with the community,” since they saw “no public benefit” from allowing the measure to pass.

4) The resolution area capriciousness didn’t stop with Falai. The owners of La Lucha, the Mexican wrestling-inspired taco stand being built at 147 Avenue A, had perhaps the longest and most surreal backlash from Militano, Fout, and others. The owners were applying for a simple beer license for their three-table taco stand, not because they want to position themselves as a bar, but because, well, tacos go well with beer. Fout claimed on more than one occasion that there are already tons of great Mexican places in the area, “especially Downtown Bakery,” and that the community has spoken out conclusively about their opposition to new liquor establishments. We can understand the desire to follow the community’s wishes, but do these folks really think that shooting down a place like this, which was more than willing to work with the board, was what the community had in mind? Some outspoken board members didn’t think so, either. After three gridlocked votes, Militano tabled the application and invited La Lucha back to the full board meeting next week. Oh, and we almost forgot: as their lawyer noted, it’s almost inevitable that the restaurant will get a beer license from the SLA. File this one under misguided and useless demonstrations of authority.

5) The owner of Lavagna came in to apply for an upgrade to his license in order to “stay competitive” by serving grappa, martinis, sambuca, and other basic liquors. The measure passed unanimously after two members of the community spoke in favor of the establishment, describing how it’s been an involved member of the community that keeps the street clean, looks out for neighbors (to the point that it’ll even sign for packages when they’re out of town), and serves food that’s pretty darn good.

6) The no brainer denial of the night came courtesy of the folks at 179 Ludlow, originally a co-op development that is now pitching itself as a hotel. Apparently the rep who was present, as well as his affiliate, none other than Bruno Jamais, thought the board might actually allow a license for a delinquent, rat-infested construction that has had a stop work order on it since 2008. Not to mention that the rep and Jamais have been before the full board twice this year and have shown no progress in getting the stop order removed.

7) The renewals for establishments with complaint histories all passed. Forum and Angels and Kings demonstrated progress with past issues of security, noise, and underage sales, and restaurant Zerza addressed a minor complaint about not informing the board about changing their menu, which constitutes a change in operations.
— Gabe Ulla
· All Community Board Coverage [~E~]
[photo credit]