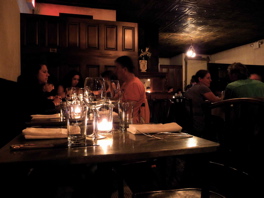 This week Frank 'the Tank' Bruni takes the L train out to Williamsburg to speakeasy themed Rye hidden away on an ugly block of South 2nd. Decked out in the classic aught version of pre-Prohibition style—reclaimed bar, pressed tin ceiling, low lighting, old beautiful mirrors—Rye opened to the public at the beginning of April under the auspices of ex-Dressler chef Cal Elliot. Below, we seek your opinion on what he'll have to say about Rye. And after the jump: background and critical history on both. [Rye, NYT, after 8 p.m.]

Background: While Rye started charging for drinks and meals in April, it never put out a sign or a phone number, kept the windows dusty, and shied away from publicity. Recently, it made Biff Grimes' round up on speakeasys and made a cameo in NYM's piece on Grizzly Bear.

Previous Reviews: Despite its lack of signage, the bloggers have now filed, and now that Bruni is seeking more esoteric spots to round out his tenure, it's his turn to weigh in. See Eating in Brooklyn (loved it), Paper (liked it alright), Williamsburg Restaurants (hates it), and eateryROW (not so impressed) for their assessments.