Share All sharing options for: A Beer At?Shannon Pot 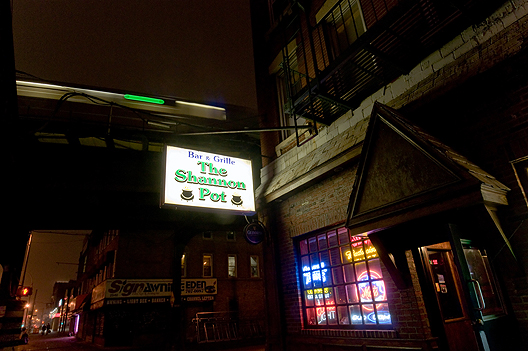 The décor of roughly 80 percent of the bars in NYC is dictated by two things: the promotional crap that liquor companies throw at them; and the trite Irish knickknacks picked up by the owner. The Shannon Pot, at the corner of Jackson Avenue and Davis Street in Long Island City, follows this model of accidental interior design. Framed map of Ireland, check. Display “Champagne” bottle of Budweiser, check. Plastic leprechaun figures, check. Mock “kangaroo crossing” sign from Cooper’s Brewery, check. “God Made the Irish #1” license plate, check.

Despite all this, Shannon’s manages to eek out a personality all its own, starting with the visually impressive, unintentional collage of 11 neon beer signs in its Tudoresque, paned front windows—something that one of the artists over at nearby P.S.1 might had wished they’d come up with. An old scythe, mounted on the wall, is a bit of a non sequitur. The parody of a baseball shirt that reads “Werksux,” on sale for $12, was designed by the owner, who likes to hold down a stool at the far end of the old, battered, wooden bar, where he conducts expletive-laden, Cliff-Clavin-like arguments about the nature of the Franco-Prussian War, and when Napoleon died.

The Shannon Pot was opened only a decade ago, but it feels like it has been rooted to its corner, directly under the rumbling tracks of the 7 train, for much longer. The presence of elevated trains seems to make anything nearby feel ancient, I guess. Anyway, shows like “The Third Watch” and “Law & Order” seem to think so. They come here sometimes when they need a backdrop for died-in-the-wool, blue-collar New York. The high ceilings are covered in dingy tin and there’s a funny room in back that look’s like somebody’s pantry.

You can eat here. (Shannon Pot is officially a “bar & grille.”) The usual Ould Sod suspects are on the menu: bangers and mash, Irish potato soup, shepherd’s pie, and the requisite “signature” burger. You can get a bucket of five different beers for $20 if you’re so inclined. The left-hand portion of the room, up a step and separated by a wooden partition and a brass railing, is reserved to dining, giving the joint a slightly more genteel air. Things get busy at lunch. On weeknights, the bar is sparsely populated, the quiet domain of regulars.

I’m told that, on weekends, the hipster art crowd invades and completely alters the vibe of the place. A sign of this mild cultural war can perhaps be seen in the bathroom, where the owner has taped up a sign saying, “Do not add any tags to this door. Please respect my party.” We should all respect one another’s parties.
—Robert Simonson