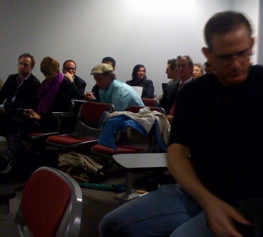 The biggest potential battle at last night's Community Board 2's SLA meeting, an application from the upcoming Grand St. Hotel, didn't even happen. However, that doesn't mean there wasn't plenty of juicy controversy and public outcry over zoning issues, outdoor gardens and, the always enjoyable, vomit covered sidewalks on the Bowery:

1) The smoothest application of the night came first. Donal Brophy plans to open a Scottish themed restaurant in the former P*ong space at 150 W. 10th St. Slated to be called Highlands, Brophy and his associates (all present with accents) say that they want to "bring a little bit of Scotland to the West Village," which apparently means being open until 3am seven nights a week. Only one stipulation, that the restaurant close by 2am on Sunday, Monday and Tuesday, was added before Highlands was given the green light.

2) The most contentious and longest issue of the night stemmed from the forthcoming Elizabeth St. Hotel and planned restaurant Blue Bell, from restaurateur Jimmy Bradley. A few problem areas came up quickly: a proposed "meeting room" (read: luxury suite) with seating for twenty and adjoining 500 square foot patio, the fact the restaurant will be responsible for service to two other areas throughout the hotel and the effect on the neighboring Chinatown elementary school.

However, most of the drama came from the community. Nearly a dozen residents showed up to voice their concern (yell) over the hotel. One particularly unhappy, and apparently notorious, nearby resident cited what she sees as countless zoning violations to the Little Italy building height regulations. After several other residents passed out numerous photos, yelled and screamed and were dismissed by the committee, one woman had this to say: "I call for two of this board's members to be removed from the board. We're not a joke! We're tired of picking up the garbage, the vomit and the glass on the Bowery." The board voted to layover the issue to next month's meeting citing questions on zoning and, more importantly, concern that this project could become the hell that is the community outcry over the newly opened Cooper Square Hotel.

3) Another Bowery related proposal came from a proposed Mexican restaurant at 354 Bowery from the owners of the much praised, Hecho En Dumbo. The new project, Aguila & Sol, aims to bring the same cuisine served in Dumbo, to a Manhattan crowd in the former Marion's space. Apparently, that translates to a DJ and operating hours until 4am. While the restaurant had the backing of several community members present at the meeting last night, including one man who lives on the floor directly above the proposed restaurant, the board still has some reservations. They site the over saturation of liquor licenses on the Bowery as a huge problem and one that they must control. Also, they see this as just another possible Pinche Taqueria or La Esquina--a low end taco stand that equates to loud noise.

There was a whole separate, legal issue that eventually brought the board to their decisions to table the issue until the next meeting. The new owners of the property, who currently operate a catering business, Bowery Time, in the building, are trying to split the license between that business and Aguila & Sol. The legality of this was called into question and argued amongst the board members. The solution: one of the board members agreed to inspect the space himself and bring his findings back to the board next month.

4) Cafe Select was there applying for a small sidewalk cafe. With only seating for ten, the cafe would be seasonal, play no music and close by 11. Because they've been open just six months and originally claimed they would not apply for a sidewalk cafe, many on the board questioned if the restaurant had been in operation long enough to be approved for the luxury. What did one woman from the community have to say on the issue? "I find it challenging to describe in three minutes the disgrace that this restaurant is” She cites loud noise, a rowdy clientele, their "sad excuse for a menu," and the much talked about "back room" as reasons why Select should be denied. Ultimately, the board voted unanimously to reject the application, asking them to come back and try again next summer.

5) Next up, Dermot Burr (Arlene's Grocery) is trying to take over the now shuttered El Rey Del Sol space in the West Village. Present last night was the prospective general manager, who currently works at The Crooked Knife. The only hiccup in the proceedings: a proposed outdoor garden with seating for nearly twenty. Concerns from board members for residents in the adjacent building led them to approve the plans, but without the proposed garden seating.

6) The final topic of the night was the take over of the shuttered Chow Bar space at 230 W. 4th St. Both partners involved boast impressive resumes from their work in London, including management at the famed nightclub Annabel's. Apparently the board can be swayed by adorable accents (or strong proposals, you pick), because they voted unanimously to approve the license.
— Matt Duckor
· Previous Community Board Coverage [~E~]