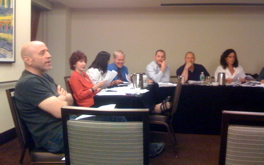 Last night we sat in on CB4’s business licenses and permits committee meeting for an evening of approbation, tabling, no shows, rejection, and of course, noise complaints.

1) The owners of Westville appeared to gain approval for a third location at 246 West 18th St., which was passed unanimously and quickly. The owner hopes to open what sounds like a carbon copy of the other Westville spots within “3 or 4 months.” The board stipulated only that he must do soundproofing to protect the residents living above the space.

2) The board surprisingly didn’t give a hard time to the owners of 532 W. 27th St, the new project in the former Club Home space. At the helm of the project are bartender John Fiore and a chef formerly of Sunset Boulevard restaurant Empress; they hope to create a place reminiscent of “Tao or Buddha Bar,” with “no dedicated dance floor” and “65 percent of the space used as a restaurant.” The board settled on several stipulations: a detailed security plan, dinner service until at least 2:00 AM, no promoters (event and PR are OK), no outdoor use, and sound limiters.

3) Like Westville, the app for the new Grand Sichuan at 368 W. 46th passed unanimously in a matter of two minutes. Stipulations: the owners must have an organized bike rack that doesn’t block the sidewalk, there must be proper ventilation, and there cannot be French doors or outdoor seating.

4) The owner of Concrete at 320 W. 37th came in to address a complaint about noise and odor control. While he insisted that “65 percent of the business” is dedicated to foodservice and tapas, a community member, speaking on behalf of the building across the street, insisted that the place is nothing more than a bar: they play amplified music and stay open till the wee hours, which is less than forthcoming considering that there was no mention of such plans in the restaurant’s 2007 app. Concrete must return on July 14 to report on progress addressing these complaints.

5) It isn’t exactly saying much, as only three people showed, but the Broadway Comedy Club was the biggest community draw of the night. The owner came in to apply for what the committee deemed a “sensible and reasonable” alteration to change an existing service bar to a stand up bar. However, it soon got heated as the board and community began to call attention to the space’s long history of issues: a lack of security, an inability to deal with crowding on the sidewalk, a failure to address sound complaints by hiring an acoustical engineer, and a less than stellar garbage pickup system. The community members insisted that for the last few years the owner has been “more reactive than proactive,” but the board was in the end generous in tabling the application and allowing the owner to return on July 14 to report on progress.

6) The transfer app for Italian restaurant Ralph’s, from the owner of Strada 57, went smoothly. The board members seemed to be very happy with the operator, although his overtures at the meeting to use the rooftop at another one of his locations, Terrazza Toscana, were pretty much shot down. Because he and his lawyer were only responding to a complaint against Terrazza Toscana, the rooftop proposal did not go for a vote. The owner insists that he will “get creative” to make the rooftop work in a way that won’t disturb neighbors.

7) The board applauded the owner of Hell’s Kitchen Café for the improvements he’s made to what used to be a “horrible”operation, but they ultimately unanimously rejected his app to use the location’s rooftop. The Board Chair, who once lived at 523 9th Avenue, the building that houses the restaurant, quipped that the HKC folks are running a nightclub without a license. While the owner has claimed consistently that he does not use promoters, several board members comically asked him why they were receiving emails from the likes of Acid Betty and “all of her pals.”
—Gabe Ulla
· Previous Community Board Coverage [~E~]