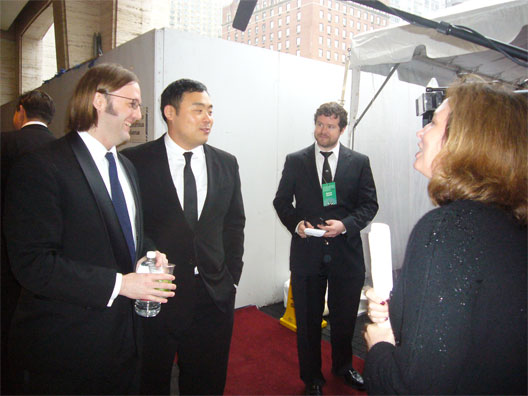 6:15pm: Though the show was officially set to begin at 6pm sharp, chefs still arriving include The David Chang Gang, followed by Wylie Dufresne, and bringing up the rear: Big Tom Colicchio.

6:17pm: Note on the David Chang party bus: the no-press rule is apparently no longer in effect—at least for the chosen circle. To wit: Food and Wine's Kate Krader and Dana Cowin arrived on the bus.

6:30pm: Mario Batali is wearing a suit... albeit with orange crocs.

6:37pm: In the lobby, a jovial Dave Chang denies Serious Eats' Ed Levine his request to hang on the ChangBus. "You wouldn't want to see what's going on in there," Chang notes.

6:45pm WINNER, Rising Star Chef: Nate Appleman of A16 in San Francisco. (Color from the stage: Appleman chokes up during his speech, thanks farmers, public relations maven and friend to small children everywhere Phil Baltz.)

7:12pm: WINNER, Best Chef Southwest: Paul Bartolotta of Bartolotta Ristorante di Mare at Wynn Las Vegas. (Aside: time for us to get back to Vegas.)

7:15pm: Wait, the James Beard Awards doesn't yet have its own hashtag on Twitter? (#jbf not really cutting it.) Let's get on this, people? Suggestions: #jamestweets #jamesbeardlovestwitter #changfest. Others?

7:20pm: WINNER: Best Chef South: John Currence of City Grocery, Oxford, MS. (Color: thanks "all of the sons of bitches, even those I fired." Like this dude's style.)

7:25pm: Todd English pulls time-worn awards-show, "Who writes these lines anyway?" gag out of bag of tricks. Rimshot? Anyone?

7:28pm: BREAKING RECESSIONWIRE: We have just received word that the Chang Entourage™ arrived in a single solitary party bus this year, down from a pre-crash record of two party buses last year. Chang, btw, is stuck in the press area before presenting the Best NYC chef award, and issues this statement on the state of affairs amidst members of the fourth estate: "This is awful."

7:40pm: So we've got like 600 photos of the proceedings so far. Anyone want to make a photogallery or two? Alright, fine fine, we'll do it. Hold please.

7:41pm: WINNER, Best Chef Northeast: Rob Evans of Hugo's, Portland, ME. We do love us some Portland.

7:43pm WINNER, Best Chef New York City: Gabriel Kreuther of The Modern. "Heads are shaking!" declares a wag behind us. C'mon, guy, why you gotta hate?

7:50pm: The Gentleman Joshua David Stein—he of Gawker, Eater guest-editing and God knows what else to pay the bills—attempts photograph of Louboutin shoes worn by rep for Solerno (and Henricks Gin, she comes back to add); wearer replies, "He's either a shoe fetishist or he's shooting up my skirt. I'm 39; I don't care either way."

7:51pm: TIDBITS: Ted Allen inquires if liveblogging is the same thing as Twitter and introduced us to his boyfriend (charming!). UNCONFIRMED, Ming Tsai is selling photos of himself for $1. MEANWHILE, girls of TONY's Feed blog are pimping their Twitter hard. (NB not yet living up to the hype.)