Here now, the continuation of our James Beard Awards liveblog from Lincoln Center. The truly obsessed may also wish to get in on our Twitter fun, yes?

8:05: WINNER, Book Award: Grant Achatz's Alinea cookbook. Comment from the press crowd, "That guy's going to win everything he's nominated for in the next five years."

8:08: Weird: David Burke was not wearing his James Beard Award around his neck when we found him at 7pm. Yet he was wearing one half an hour later. Did he secretly win one without us knowing, or...? Update: It's EXPLAINED.

8:20: Much love to the cookbook writers but we're going to get a drink during the 20 minute book awards portion of our evening. Zzzz.

8:37: Mario Batali makes an appearance in the press room. Still can't get over that croc and suit and slicked back pony tail.

8:45: Michael Friggin Pollan, the Shaman of Slow Food, is a no show.

8:50 Stanley Tucci: "We have got to move this thing along because I'm starving! So whoever wins, just say thank you and get the hell out of here...Now from Totonno's...Louise!"

8:51: Richard Gere is IN THE HOUSE. And is it weird to say he looks...sexy? Eater photog Krieger (shooting for JB House) scored a picture of him doing a for real lean on a woman. Developing...

8:55: RED ALERT: We're hearing early reports that there is half as much food as last year. The whole outside area is NOT OPEN. We repeat: Not. Open. When this baby lets out, it's going to be pandemonium.

9:09pm: WINNER, Pastry Chef: Gina DePalma, Babbo. Someone in the press scrum screams, "Yes!!" DePalma, who is in remission, gives an emotional thank you to Batali and Bastianich. 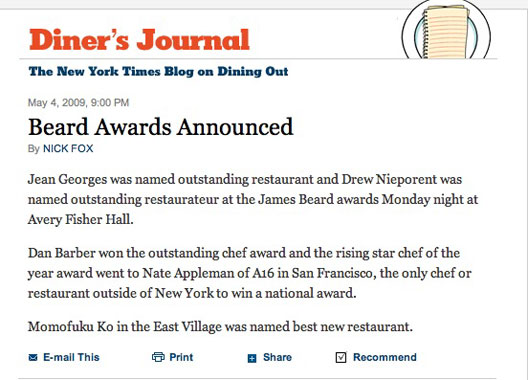 9:25: So we're sitting here getting excited for the final four big awards, when Ben Leventhal drops by to drop the word that Josh Friedlander of The Food Section whispers that... THE NEW YORK TIMES HAS ALREADY POSTED THE FINAL RESULTS. Screengrab above.

9:32pm: WINNER, Outstanding Restaurant: Wait for it, wait for it, Jean Georges! Shocker.

9:37pm: WINNER, Outstanding Chef: They're just reciting the nominees here, but we're going to go ahead and give it to Dan Barber. (UPDATE: He won! He won! Shocker. And he's doing the usual cute/awesome Dan Barber thing, but we're still SHOCKED by the breach. SHOCKED WE SAY.)

9:43pm: Chang drops by to say hi; was UNAWARE OF NYT BREACH before accepting award for Ko. Hug?