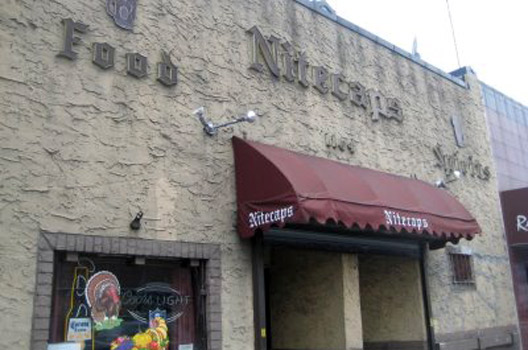 Midwood: There’s not much to look at on the Midwood stretch of Coney Island Avenue. But that doesn’t stop the denizens of Nitecaps from periodically emerging from their drinking den to take a gander at the four-lane traffic and un-beautiful industrial landscape. Once back inside, they have to wait another ten minutes for their eyes to adjust. For Nitecaps, which is near Avenue H, is a dark bar. Dark like a cave. Dark like a mineshift.

Wait a while and your eyes slowly begin to discern shapes of things you didn’t know were there. There, in the corner: an old metal coat rack. On a shelf below it: forgotten piles of New York phone books. Behind the bar: a small fish tank housing a solitary fish. And there, tucked in a space to the right of the door: two neatly kept dart boards, with just enough space in front of them to hold a game.

Those dart boards are not just dart boards. They are Nitecaps' heart and soul. In the cement-and-pavement center of Brooklyn, there are certain bars known as Dart Pubs, and Nitecaps is one of them. The joint is on the Gotham City Darts League circuit, and competitive games go down there on Mondays and Tuesdays. The tavern has frequently emerged victorious. Large, odd trophies, with gold dart boards at their crests, line the back of the bar. The bartender said the owner has many more in her office. (Pool is also popular here, but it takes a back seat to darts.)

A patron told me the bar is at least 20 years old, but—judging from the old, warped, wooden bar, and the aging appearance of the rest room doors—I’d add at least 20 more years to that estimate. From the outside, it looks like a kind of fortress, with a rugged gray façade and two small windows that emit no light. Large words on the front promise “Food” and “Spirits.” But this is a beer place; the available brands are written in magic marker on a piece of white paper taped to the wall; only two are on tap. There are spirits, but it’s doubtful that any but a few of the bottles stir from their shelves. And the food on offer is limited to Cheetos. (However, I do hear there’s a big spread on dart nights.)

A strange face is likely to get a friendly grilling here. One imagines few people other than extreme locals and dart lovers seek out the protecting walls of Nitecaps. Then again, who knows? After Coney Island Avenue shuts down for the night, this lonely bar is about the only game in town, darts or no.
— Robert Simonson