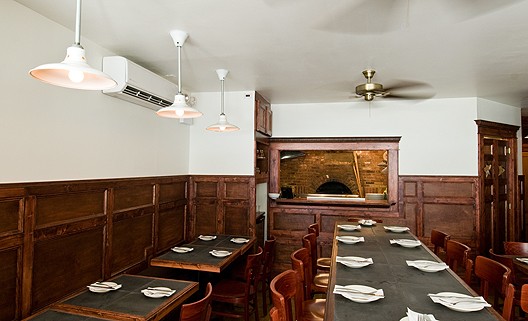 Emporio: The first courses came out so fast on a recent Friday night visit to Emporio, the new rustic Italian spot in the old InTent space, that there is no possible way they were made on the spot. The kale salad was about what you would expect (crunchy, green, etc.) but the mushrooms on top were flavorless. The octopus and the fried artichokes were decent, but better can be had elsewhere. That said, the kitchen fares much better with the pasta: their orecchietti with shrimp and cauliflower was addictively good and served in a generous portion for $14. Considering the low prices and rustic/casual vibe, I would go back to try the rest of the pastas and more of the mains when I'm in Nolita.— Kludt

Marea: Last Wednesday Martha Stewart and I, separately of course, checked out the much-hyped, just-out-of-gate seafooder from Michael White and Chris Cannon. Bruni's swan song four star review, they say. Chill out people and actually eat there before you begin the coronation. It may very well reach such heights, if my first meal was any indication, but there are details to work on first. Service is green, at least in the lounge and crudo bar room. Menu knowledge is not up to snuff (if your chef is known for his handmade fresh and dry pastas then you should probably learn the shape of, say, gramigna et al). Too many glasses of wine and water went unfilled. You can cut them some slack...for now. Food is pretty close to perfect. Crudo are sensational. Tasting of three prawns—Alaskan sweet shrimp, Scottish langoustine, and California spot prawn—is a must. A few suffered from a heavy-hand with an evoo squirt bottle. Softshell crabs are smallish, which I prefer, and served with peas, salame, and pickled turnips—which really make the dish. I've never said that about turnips. Shrimp and lardo paste stuffed morels, wet and punchless, was the lone dud of the night. Pasta, the noodles themselves, is outstanding. Sauces need a bit more tinkering. Spaghetti with urchin is a bit tame—demands more brininess and funk, that's why you order it. Gramigna with smoked cod tripe (aka cod bladder, I think) and speck is an upscale carbonara. Smoked cod tripe, in terms of texture, is the bone marrow of the sea. Grilled fish results were mixed—halibut was slightly overcooked but rockfish from Alaska was best piece of fish I've had in long time. With fish served this simply (grilled or griddled with choice of sauce), there’s little room for error. Prices aren't as crazy as I feared. In terms of atmosphere and feel it's a cross between John Dory and Le Bernardin. With consistency and continued improvement, it should join the ranks of NYC's best. —Andrew Knowlton

The Brooklyn Star: I swung by Brooklyn Star the other night, which unfortunately is located right beside a pretty raw construction site. If it weren’t for the smell of smoke from the wood-fired oven detectable from the street, I never would have guessed there was a restaurant there. They’d only been open about a week, which may explain the almost empty dining room (it was also a Monday). Although the atmosphere was anonymous-pubby, the expectations for the food were somewhat high given chef Joaquin Baca's Momo credentials. The Southern menu, enticing in a junk foodie way, delivered dishes that were consistently heavy-handed. Run-of-the-mill tasting bacon appeared unannounced in several items, including the mac and cheese and the mashed potatoes (I’m pretty sure the croutons in the wedge salad were cooked in bacon fat). Vinegary fried pigs tails and fork-tender Dr. Pepper-basted riblets were fun finger food, but the charm wore quickly due to their one-note richness. Same goes for the country-fried steak, smothered in white gravy and tasting a bit like liver. The best thing we tried: Sweet and salty biscuits. For now, there’s no liquor license or dessert—though we spotted two crates of strawberries, and were kind of hoping they’d get sandwiched with some cream in those delicious biscuits for a finale.— Gabriella Gershenson

Studio Square: If you want the old-world sing-a-long beer garden experience, go to Astoria's Bohemian. If you want fire pits, multiple bars, streamlined food ordering with name-brand meats, flatscreen TVs and Journey blaring out over the speakers, go to LIC's Studio Square. These aren't necessarily faults, it's just that Studio Square is definitely more polished than any drinking den north of the Queensboro Bridge probably needs to be. Plenty of backyard picnic tables a plus, but bring a jacket if there's even a hint of cloud. (It gets cold on the other side of the river!)— Arak

Bacaro: Last week, I descended into the depths of Bacaro for a little ladies get-together. It's like a dungeon down there, and I mean that in the best way possible. We found our way to a table in one of the little rooms in the back for a meal of passed appetizers and rose. It was kind of strange to make a meal out of cheese plates, octopus and potato salad, and rice balls--but everything was tasty. This a good spot to dine with a large party, or with that special someone who you'd like to drag into a dark cave.—Price

Veloce Piizzeria: The "Grand Opening!" bunting and red-and-white checkered tablecloths mean this is diner-turned-wine-bar-turned-pizza-place is a slightly less pretentious entry to the haute pizza derby, but the sharply dressed waiters still ably project disaffected cool. Small but varied pizza menu, and the shtick here is Sicilian (the square pies come to the table still in the pan) but the pizzas are probably not quite thick enough for purists. Tasty though, and sure as heck better than Tonda two blocks over, but given the current golden age of East Village pizza (Artichoke, Una Pizza, Luzzo's, Gnocco, etc.) I kind of wish this place was still Teresa's.— Arak