To round out the week, another edition of EaterWire. Got news, scoop, gossip, dreams, fears, or threats to share with us? The tipline awaits your call. And as always, our thanks for your continued patronage of Eater. 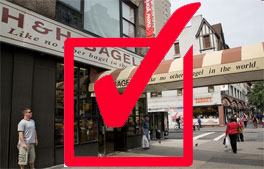 UPPER WEST SIDE—Per a phone call to the establishment (and the confirm from Diner's Journal), H&H Bagels reopened for business this afternoon following its unceremonious shuttering at the hands of the taxman. Elsewhere in the nabe, though, others have not been so lucky; per a tipster, "Just walked by the Elite Cafe on Columbus, and it was shuttered due to non-payment of taxes. In combo with H&H, it looks like the taxman has been busy recently." (Calls to Elite were met with the dreaded endless ring this afternoon. YDHTST.) [EaterWire]

SOHO—Zoë, one of the first restaurants in the neighborhood to go umlaut, filed for bankruptcy protection this week. Down, maybe, but not out, per an Eater operative who emailed a few hours ago, "I'm standing in front of it and it's full of people totally open and the windows are open and everything." [Crains/EaterWire]

TRIBECA—And because we've gone at least three hours without fresh word from Locanda Verde, this, from The Feed: "The back room, located behind a set of glass doors by the kitchen, will soon be the site of a private dining room with a separate entrance on North Moore Street." [emphasis ours] Chef Carmellini: "I see something like $30 family-style meals and fried chicken dinners and pulled pork nights.” Moth. Er. [The Feed]