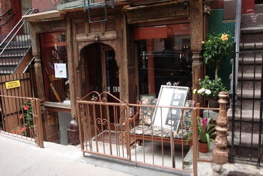 Taking down shillers one by one so you don't have to, today we set our sights on the new brunch at Elettaria, Dog Ear Tavern, Buenos Aires, and a doozy for Sintir.

A particularly dedicated Elettaria fan sounds off in the eater comments:

"Elletaria's decision to launch a brunch menu couldn't come soon enough. For the last year I have sent fellow foodies, relations, and taken first dates. The bar is inviting (so much so that I often don't make it to a table), the staff is attentive yet not overbearing, the drinks are inspired and the food is consistently crave worthy and inventive. The owner-run restaurant is exemplary of dedication, commitment and talent, and the menu expansion couldn't elicit more excitement from those of us who support them wholeheartedly."

"Did comment #1 actually look at the menu? The burger is a reasonable $11, The Buds are $5 and the Steak sandwich is $14...(are you a competitor?).....The Ear inn and dog ear tavern share one common word and the new place is a reference to the since departed printing industry. And how does Balthazar enter the picture? Work with the place.... hater!"
"A pool table and comfort food.......just what the neighborhood needed.The place looks pretty cozy and I think They are having a light menu until closing around 2 am. Officially opening next week the owner said as he was painting the place."
"I've lived in the neighborhood for 5 years, and this is the first restaurant and bar that has ever opened there that is inviting. There's a pool table, bar and restaurant area. When the weather is nice and the windows are open, it's even more inviting. Large selection of beers and a friendly staff."

"This place is always packed, because its GREAT, but with that said, they bend over backwards to get u in the door, and once there u feel special. The staff make u feel at home and welcome. There is NOTHING pretentious about this place, even though for my money it serves the best steak in NYC. Ive eaten in many steakhouses including Peter luger, Smith Wollensky, Gallaghers...I can tell u without a doubt Buenos Aires is a MUCH better value, better food, better atmosphere...simply superior!! I highly recommend it and soon plan on going back for my 16th time. Forget the other steakhouses, Save yourself some money and a bad digestion, come to Buenos Aires u will be very happy u did...BA is where its AT!"

Some of the most heinous shilling we've ever seen is taking place in the comment thread following Robert Sietsema's review of East Village newcomer Sintir. The entire thread deserves a read-through, but here's our favorite

"I flew from LA to witness the opening of Sintir, and watch with amazement the reaction of all guests in the first 4 days. The first day was, as in any restaurant opening a bit hectic. But the most surprising thing was how guests reacted after they've tasted the food; you could see a total sigh of satisfaction on their faces like if they were stroke by a Magic wand. And that, my friends is something that surpasses even my own opinions about how delicious the food is at Sintir. Don't be deluded by some clearly biased reviewers, and please do yourself a favor and go taste some of the finest Moroccan food you can only (with some luck) find in Moroccan homes."