One Year In: Scarpetta

Share All sharing options for: One Year In: Scarpetta

Welcome to One Year In, a feature in which Eater sits down for a chat with the chefs and owners of restaurants celebrating their one year anniversary. But not just any restaurants—those that were overhyped, in some cases to the point of backlash. Now they have to survive with the rest of the pack. 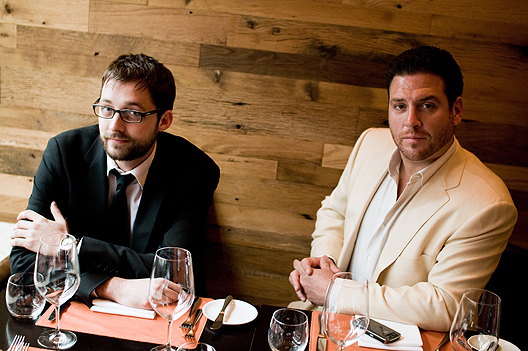 On Monday night, chef Scott Conant and GM (and genius story-teller) Jeffrey Tascaraella held a party to commemorate the one-year anniversary of their runaway commercial and critical success Scarpetta. They're the first to admit that the price point here isn't exactly recession-friendly, but they say they're serving the kind of food people are looking for in times like these. Regardless, Conant has already expanded his Scarpetta model to Miami. Next up, Las Vegas, then the world.

So, what drew you to the Meatpacking District? It's not exactly a neighborhood known for serious restaurants. Scott Conant: It's not. No. I really feel to a certain extent, that the West Village is like the last neighborhood in New York City, in Manhattan. Going to different restaurants opening the West Village, some of the better restaurants, I just felt like there was a great opportunity...This is the neighborhood is a little bit north, but it still made sense. Did you look around there too? SC: I did. But you know, my core clientele is kind of on the Upper East Side really, Midtown. And I knew if it was too far downtown, I would lose them. 14th Street seems to be the cut off point. But I would appeal to a new demographic, because those downtown folks don't really go uptown.

You get the Meatpacking District crowds too, right? I've seen the bar area at night, and sometimes it's crazy. SC: It's crazy, but still well behaved. You know, we're not getting the yahoos. Thankfully. Not like the clubbing types? SC: No. And it's funny, because I think at the very beginning--and Jeff knows this better--they would kind of walk in and look around and say, "This isn't the place for us." It's very unassuming too. It looks like a little house. You walk in and you're surprised that there's a very serious restaurant back here. There's no neon lights and blinds outside and things like that. Not yet. SC: Thankfully, not yet.

Jeff Tascarella: And it's a great bar, you just want to sit there and eat and drink. SC: There were certain elements in the room that we really wanted to maintain. One, that bar was there from when it was Gin Lane and we refinished it and put the marble tops on it and whatnot. But, I just thought it was so soulful, you know what I mean? And the skylight was there as well. How long did it take to renovate the whole place after you got it? SC: It was three months after we got it.

And when you opened were you just slammed from the beginning? SC: It was funny, because you know, we all thought, we'll do 80 people a night... JT: I'll tell you. Everybody was waiting for Scott to come back. So there was this huge expectation and Scott had been away from the city for a long time. So before the doors were even open, the phone was just buzzing, buzzing, buzzing. And we were being held up with some of the best restaurants in the city.

Were you guys worried about that? SC: Well, I didn't see that to be honest with you. I didn't feel that way. It was a small restaurant, hopefully we'll make some friends, that was the overall intention. There was no ambition other than to create a restaurant that we could do in different marketplaces as well. Fortunately, it's resonated with people. It's really about, without sounding cliche and without sounding like a douche, it's really about making people happy.

With a lot of restaurants that get a lot of buzz before they open, it's hard for them to live up to the expectations. That didn't bug you? JT: I don't think so. I think Scott put together an awesome team of people. It's really in the simplicity of good food, it's priced fairly. So you open and you're like, "We're going to nail this." SC & JT: No, no, no. SC: There's a lot of good fortune surrounding this as well. The kitchen staff has been with me for years. The pastry chef has been with me for ten years. My PM sous chef, who cooks most of the pasta has been with me for 13 years. The guy who works at the fish/meat station has been with me for 14 years... It's really cultivating a team of people who are very familiar with the dishes, but it's not just that, they're familiar with the amount of soul that I demand in each dish.

And when did critics start coming in? SC: I think night one. JT: I remember one night walking into the dining room. Adam Platt was right there. Frank Bruni was where we're sitting. Ruth Reichl was over there. Steve Cuozzo was here.

All in the same night? SC: All in the same night. JT: And god knows, who, you guys and everyone-- They're all winking at each other. JT: Everyone's taking pictures. And blogging. Twittering. SC: Bobby Flay was over here as well. And Michael Symon. It was an insane night.

And then all the reviews started coming out, and they all came out positive? SC: They all came out positive but, you know, again I attribute a lot of it to good fortune. I really wanted to put ourselves in a position to succeed. And fortunately, the food resonated. A lot of these things can go either way. A lot of it doesn't have to do with me.... I'm a big believer that there are three components to a restaurant. There's the food, the service and there's the atmosphere. And if all three of those things are really cohesive and working on the same level—all in tune—we all speak all the time. It's never trying to create a relationship where it's the kitchen against the front.

Some restaurants, they get a lot of buzz, the critics come and then there's a slump, but it always looks full here. SC: You know, we're fortunate because it's a small restaurant. You know, 75 seats in the rear and 25 in the front. The perception is that even if we're not hitting all the numbers all the time, it looks like it's full.

Have you noticed any drop in people coming in? Or a drop in checks since the recession hit? SC: I'll just say that I think we've been really fortunate to make a lot of people happy. I don't want to be that guy and say, "Well, no, we haven't lost any business." JT: We're doing a very recession friendly thing. I'm not talking about pricing. Say one of our guests come in and says, "I've lost $7 million today. You know what? I need a bowl of spaghetti and a glass of Merlot." What else do you need? What else do you want? SC: I want that bread basket and a bowl of spaghetti, you know what I mean?

SC: It's funny, because when we started it wasn't that way. People were coming in and buying $1,000 bottles of wine. They were really throwing their money around. It just happens a lot less. But the same people are coming in, but instead of buying that $1,000 bottle of wine, they're buying a $200 bottle of wine. JT: Three times a week. Which is plenty.

And when did you decide to branch out to Miami? SC: It was something that I decided to do awhile back; I was in negotiations for quite a few years. We're doing Las Vegas eventually. We have a couple other pots on the fire, so to speak.

How did opening that restaurant go compared to this one? Did you learn a couple of things? SC: Every opening is unique. In Miami, it's been open six months now. When we got our certificate of occupancy on that space, and two hours later the owner was sitting down with eight people and having a tasting menu of nine courses. Somehow, we pulled it together. I think the smart thing that we did is that we really insulated the management staff with people in New York who we also worked with before, by about 50%. JT: And that's no exaggeration either, two hours. SC: It was very funny. He walked in and went, "Do you have any food for me?" And I had my pasta guys making pasta on the other side of the resort. So we brought everything in. It was just crazy how it all worked. Literally, at that point, Jeff Silver was sitting down with nine people. In walked A-Rod with Gwyneth Paltrow. In walked Martha Stewart. In walked all these people.

But your pasta guy's not going to be able to be down there all the time. SC: I brought one of them down for a week just to kind of train the other guys. I brought one of my sous chefs down for a month. All that being said, it was tough to nurture a new kitchen staff to the philosophy.

You want it in London, in Barcelona. SC: That would be cool. I mean wouldn't that be awesome? I happen to love traveling. I happen to love culture. My wife's Turkish. I would love to do one in Istanbul.

And what about Scarpetta NYC? Any tweaks you're going to make?
JT: We've got a couple of ideas right now. SC: You know, the good thing is that in time we're going to just keep tweaking things. Fortunately it's working and fortunately we're making people happy. There's nothing better than that.
· Previous Editions of One Year In [~E~]