Have a restaurant or nightlife question that you'd like the Eater readership to tackle? Send it in to tips@eater.com and it may just get the "Ask Eater" treatment. 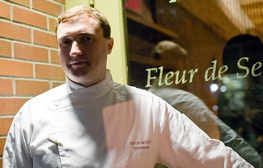 An interesting discussion question from the inbox today: Should restaurants redeem gift certificates to their now defunct sister operations?

"A friend just informed me that he received a gift certificate to Fleur De Sel as a wedding gift in Late October. The restaurant closed in February. Owner Cyril Renaud also owns Bar Breton, nearby. Shouldn't they honor the Fleur De Sel certificate (which they currently refuse to do)? They closed Fleur De Sel....it wasn't put into bankruptcy. How can they/he not either honor the certificate at his other restaurant or refund the money? What is the proper protocol? What's his recourse?"

On the one hand, they are completely different restaurants with different price points. On the other, the owner took the money and gave nothing in return (one of the reasons retailers love gift certificates so much) and could easily fix the problem. Plant your thoughts down below.

UPDATE: From the reader: "Bar Breton called my buddy an hour ago and said they would honor the Fleur de Sel certificate."
UPDATE No. 2: From owner Cyril Renaud: