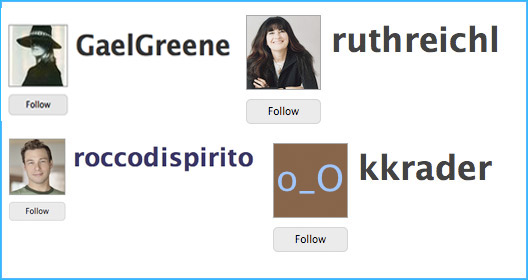 @roccodispirito: "Angels&Demons is a better film than DaVinci Code was. But ALL of Dan Brown's books, including Deception Point & Digital Fortress are magic."

@KatieLeeJoel: "Just passed a billboard for M&Ms... Looked so good...melts in your mouth...I should stop teasing myself"

@plattypants: "platty's a model of fortitude and mental discipline. it's been 4 days since he stuffed a bahn mi down his craw."

@gaelgreene: "@MarthaStewart: I twitter because I want to be like you when I grow up Martha. And because now I seem to be addicted."

@ruthreichl: "Getting dozens of emails from people who think I know who's going to replace Bruni. I'm so out of it, I had no idea he was even leaving.

@feedbagmeals: "Last Meal: A meatball from Buon'Italia; salad from some other place."